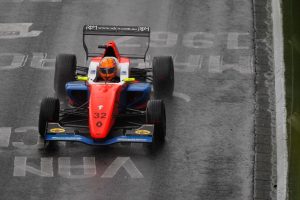 Alex Peroni continued his remarkable record at Pau by taking a second straight Formula Renault Northern European Cup win, and a third in four races at the French street circuit.

The Australian just beat MP Motorsport team-mate Christian Lundgaard to pole in qualifying, but the challenge from Lundgaard was weaker in the race as the Dane had to deal with the spray of the leader.

Traffic in the closing stages of the race did allow Lundgaard to close the three second gap down to nine tenths, and the Dane then drew alongside his team-mate as he celebrated victory, meaning they were separated by 0.125 seconds at the chequered flag.

The combination of the race starting behind the safety car, the wet track surface and numerous yellow flags caused by backmarkers meant that overtaking was at a minimum.

Red Bull junior Neil Verhagen ran in third for the first half of the race, with Charles Milesi and Logan Sargeant behind him in fourth and fifth.

A problem that sent Milesi to the pits and eventual retirement promoted Sargeant to fourth, and the R-ace GP overtook his fellow American for the final podium spot on lap 13 of 20.

Frank Bird got his best ever finish in single-seaters in sixth, ahead of his Tech 1 Racing team-mate Thomas Neubauer.

On the last lap Neubauer came under attack from Alexander Smolyar, who had spun under safety car conditions and fought his way back through the order. The pair tried running side-by-side through Pont Oscar, with Smolyar being squeezed into the barrier on the outside and an early end to his race.

Smolyar was already under investigation for his part in several incidents, one in which he almost forced Arthur Rougier into the barriers at the Turn 4 hairpin. Rougier was still able to finish eighth, ahead of full-season NEC drivers Douried Ghattas and Gabriel Gandula.

Peroni leads Lundgaard by 12 points in the standings, although it is yet to be confirmed whether the pair will enter the next round at Monza.