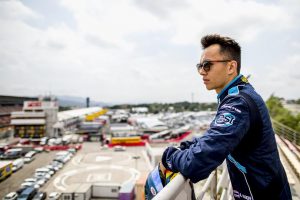 Alex Albon has successfully secured his DAMS seat in Formula 2 for the rest of the season, having started the year competing on a race-by-race basis for the first two rounds.

“For me this year it was DAMS or nothing,” The Anglo-Thai told AUTOSPORT.

“I had to get on with the job, I just took it race by race. I had a strong winter testing programme with DAMS so I was always hopeful it would work out.

“It’s nice to have it all sorted, on the other side now there’s pressure to perform. The aim is to fight for the championship.”

Albon hopes his performances so far will help put him on the radar of Formula 1 teams, having previously been a member of Lotus’s young driver programme between 2013 and ’15.

His car is carrying the logos of the Bullfrog GP initiative – which is also backing the Hitech Formula 3 squad – having previously relied mostly on sponsorship from Thailand.

DAMS team boss Francois Sicard added: “Alex is extremely quick and it’s great to have him, we have a strong line-up with Nicky [Nicholas Latifi].

“We have two really strong drivers, so now it is up to us and them to deliver.”