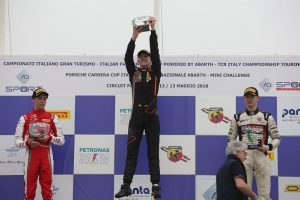 Frederik Vesti followed up his race two triumph with another Italian Formula 4 win at Paul Ricard, which leaves him one point off third in the standings.

The Dane beat poleman Fittipaldi into Turn 1 at the rolling start, and immediately created a gap up front.

Fittipaldi then lost a place to Prema team-mate Olli Caldwell, up from fourth on the grid, who worked on reducing Vesti’s lead.

On the fifth lap Vesti made a mistake, allowing the two Prema drivers to close in. The front three had a sizeable gap to KDC Racing’s Toby Sowery, who was holding off Bhaitech driver Leonardo Lorandi for fourth.

Vesti was able to extend his lead again when Caldwell and Fittipaldi started fighting over second, with the pair swapping positions.

Caldwell got back past, as Fittipaldi started slipping down the order. Sowery hassled him for several laps before getting past, with Lorandi taking less than a lap to make his move stick.

On the last lap a slow first sector by Vesti brought Caldwell and Sowery onto his tail,? and the inclusion of traffic meant Caldwell had a look for the lead in the final sector of the lap. The top three crossed the line separated by less than half a second, with Vesti heading Caldwell and former BRDC British Formula 3 frontrunner Sowery.

Lorandi finished fourth, crucially one place ahead of title rival Fittipaldi, bringing the gap between the pair in the standings down to 12 points.

Jack Doohan got involved in several battles, with each one pushing him further down the order to his eventual finishing position of 12th.