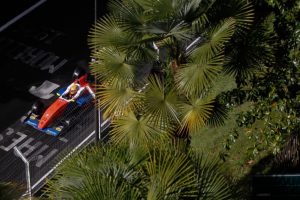 Alex Peroni set himself up for another Pau victory after coming out on top in a damp qualifying session for the second race of the Formula Renault NEC season opener.

As on Saturday, it was another battle between MP Motorsport drivers Peroni and Lundgaard, who both opted for slick tyres on the drying track.

Lundgaard claimed top spot just before the chequered flag and then further improved his time, but Peroni managed to put in a lap that was even faster with his final attempt.

Tech 1 Racing’s Neil Verhagen was third fastest, over four tenths behind but the only other driver to get within a second of pole.

The non-Eurocup entries were once again off the pace, with R-ace GP’s Gabriel Gandula doing the best job in 11th place, albeit 3.1 seconds off pole.

The session was interrupted by ScoRace Team’s Sharon Scolari spinning on the run to La Gore and causing a red flag. At this point wet tyres were the way to go, but all cars were on slicks by the end of the session.