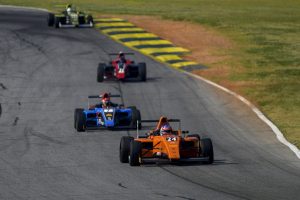 Rasmussen dropped to fourth in the standings with three pointless races, while Pederson, James Raven and Jose Blanco-Chock shared the victories.

Pederson celebrated his 19th birthday with victory in the first race. Fellow Dane Rasmussen did start from pole, but lost the lead to Pederson immediately, and then came under pressure from Dakota Dickerson.

The top three fought fiercely through the first lap, but their battle was neutralised when Rasmussen understeered into the barriers at Turn 2 on the second lap. With several other drivers also being involved in incidents, there was no choice but to call a caution period.

On the restart Pederson was unrivalled, as Raven started to challenge Dickerson. Their battle lasted to the end of the race, with Raven edging Dickerson to the line to take second behind Pederson.

The fastest laps of race one set the grid for the second race, with Pederson heading Dickerson and Raven. It was the last of the three who prevailed though, with the Briton taking his first win since 2016. Dickerson took second and fastest lap, and pole for the third race as a result.

Pederson did finish third, but was then demoted a position for passing under yellows, handing race three front-row man Blanco-Chock the final podium spot.

Ramussen never recovered from his first race off, finishing 12th and 18th in the remaining races.

Casper T. Hansen was one again the man to beat in Danish F4, and although he was spared the embarrassment of losing to a Formula 5 driver, he did miss out on the race one victory at Jyllandsringen to Casper Pilgaard.

He was also finished behind Aske Nygaard Bramming in the first race, but Hansen extended his championship lead by winning the other two races.

Mikkel Grundtvig and Bramming finished second to Hansen in races two and three, with Grundtvig establishing himself in second in the standings. One top-five finish for Valdemar Eriksen meant he lost his third place to Jonas Lindhard Nielsen, who did manage to finish on the podium.

Mads Hoe took a triple win in the F5 classification, finishing fourth overall in the second and third races.

Reigning F4 South East Asia champion Daniel Cao looks like he may become a double F4 champion this year after dominating the first Chinese F4 round at Ningbo.

The BlackArts Racing driver took pole and locked out all three wins and fastest laps. Racing League’s Yufeng Luo was his closest rival, finishing on the podium in all three races, with Daim Hishammudin, the Monster-backed Alex Yoong protege and team-mate to Cao, also visiting the podium multiple times and sitting in third in the standings as a result.

Second place in the final race of the weekend not only means that Wangcheng Zeng heads that classification, but is also fourth in the combined standings. Zongyi Shang and Zijian He were the CFGP winners in the first two races.