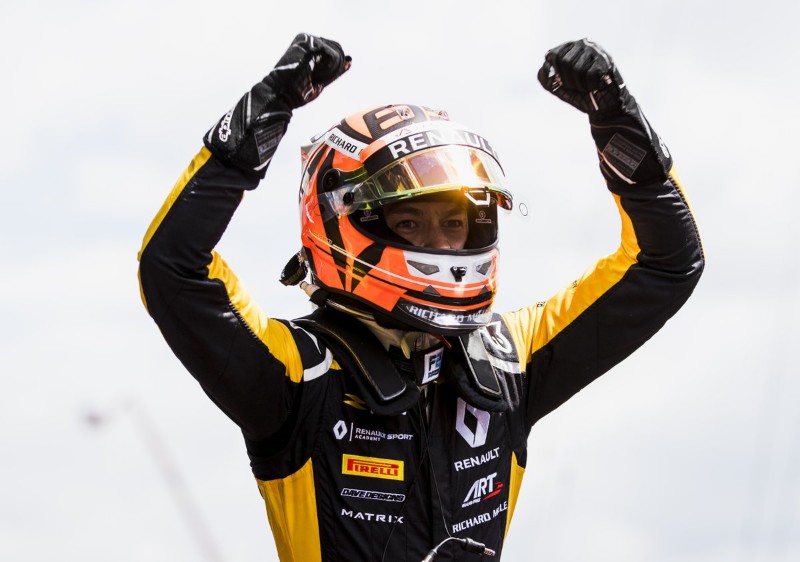 Aitken started third but vaulted to the front of the field by Turn 1, as he demoted polesitter Artem Markelov and Sergio Sette Camara. He then began to construct a lead, which he stretched to 11 seconds after five laps with the aid of a well-timed?virtual safety car.

A subsequent full safety car was deployed when Nirei Fukuzumi collided with Tadasuke Makino at Turn 4 while battling on the fringes of the top 10. Fukuzumi was caught out by the circuit still being damp off-line from the early morning rain.

This eradicated Aitken’s advantage but despite two later virtual safety car’s disrupting his progress, he led every lap to take the win. After George Russell’s win on Saturday, Aitken’s victory ensured an ART Grand Prix lock-out of the top step of the podium in Spain.

Alexander Albon finished second. He challenged a slow starting Sette Camara into Turn 1 on the opening lap but the Carlin driver was able to hold on to second. Albon had to wait until lap four when Sette Camara ran wide at Turn 10 before climbing to second. Sette Camara’s mistake also allowed his team-mate Lando Norris through into third.

Albon and McLaren F1 reserve Norris traded times throughout the rest of the race. Norris was unable to draw close enough to mount an attack and finished third.

His efforts in trying to overhaul Albon were disadvantaged by the VSC. Sette Camara stopped from sixth place after his fire extinguisher malfunctioned. Norris reported an issue with his delta at the restart, subsequently losing nearly two seconds to Albon.

This initially?put Norris into the clutches of fourth-placed Luca Ghiotto. However, the Campos Racing driver soon dropped back and was passed by George Russell with six laps to go. Norris claimed a second podium of the weekend, Russell finished fourth and Ghiotto was fifth.

Sean Gelael ended up sixth after a clean, consistent race. It included a battle with Antonio Fuoco, who took the final point in eighth.

Nicholas Latifi held off a recovering Artem Markelov at the end of the race to hang onto the final point. Markelov slipped from pole to sixth on lap one and proceeded to drop outside the top 10 in the opening laps as he struggled for rear grip.

Nyck?de Vries retired after contact with Ralph Boschung on lap four pitched him into a spin at Turn 10. The contact was made while he was recovering from a trip through the Turn 4 gravel trap on the opening lap after hitting a damp patch on entry.