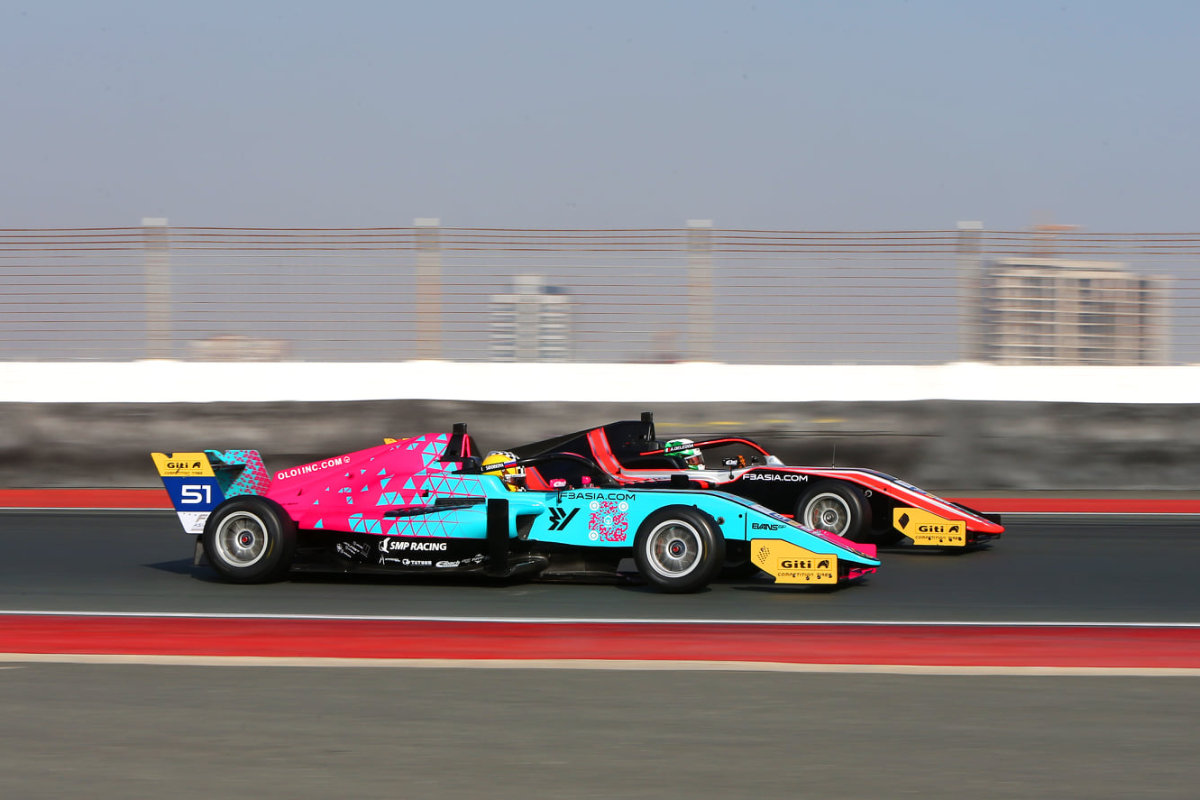 With a generous helping of FIA superlicence points available – more than can be earned from winning the Indy Lights or Euroformula titles – drivers from the higher rungs of the single-seater have flocked to compete in the five-round series.

The biggest change in this year’s championship is the increased and formalised presence of faces from the Formula 2 paddock. Most notable of these is Prema, which will run three cars with Abu Dhabi Racing and will also have a data-sharing agreement with the all-Indian Mumbai Falcons team that is stepping up from the X1 Racing League in its home country.

Travel restrictions and a change in the flow of money as a result of the coronavirus pandemic has meant the East Asian presence has been reduced – there are no Chinese or Japanese teams for the first time – and the championship has relocated entirely to the United Arab Emirates.

Abu Dhabi and Dubai are visited twice, with three rounds at Yas Marina Circuit and two at Dubai Autodrome.

It marks the fourth year of Asian F3, and the second time it’s run to a condensed format. In 2019, a Winter Series was held before the main season and future IndyCar star Rinus VeeKay won the title as most of the headlines revolved around then-Red Bull junior Dan Ticktum’s curious lack of results.

Hitech GP ran both of those drivers, and also won the first two year-long titles with Raoul Hyman and Ukyo Sasahara in 2018 and ’19. The series then opted for a winter format across 2019-20, and Hong Kong’s BlackArts Racing took Joey Alders to success. If the paddock thought it was all-change then, it’s all-change now too as Josh Evans has left BlackArts to launch his own Evans GP team, Hitech has expanded its presence and F2 expertise is bleeding in across an exciting and varied grid.

We preview each drivers’ chances of becoming the next name on the champions list below, and in the latest episode of the Formula Scout Podcast. It can be found here, or on Breaker, Google Podcasts, Overcast, Pocket Casts, RadioPublic, Castbox, Apple Podcasts and Spotify. 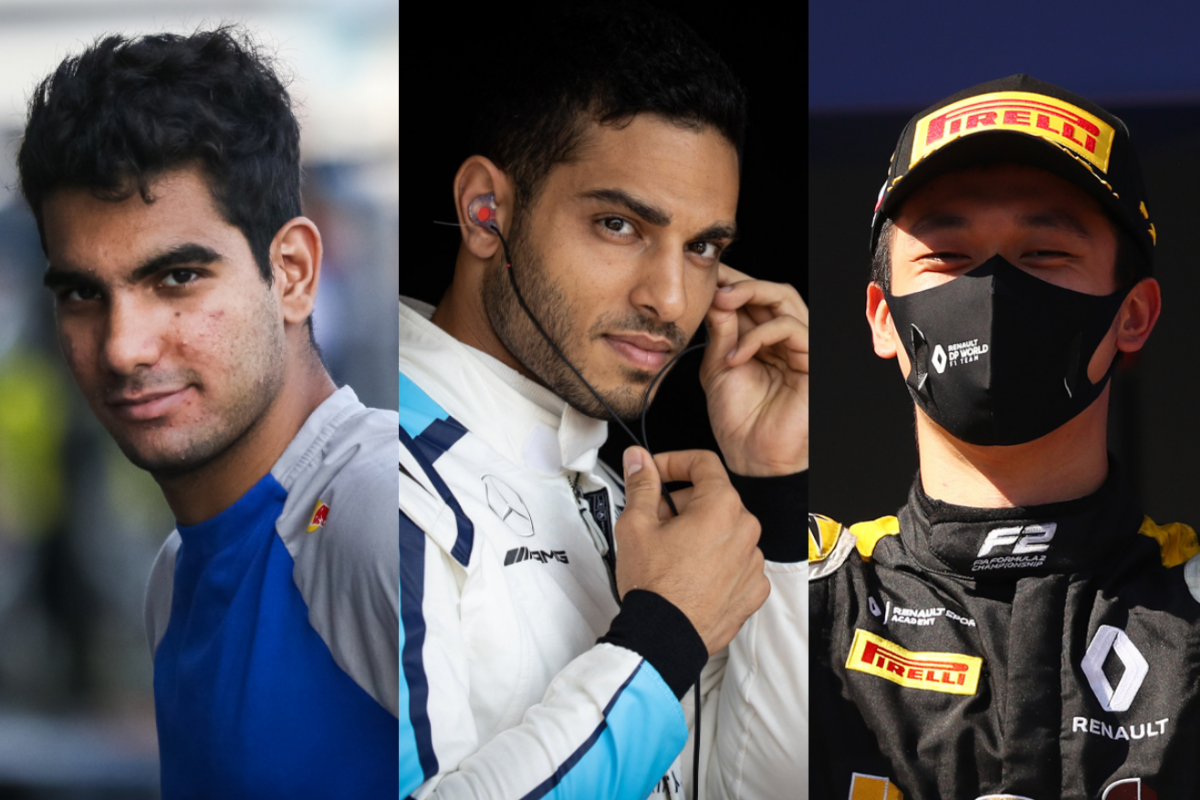 Nikita Mazepin became the first active F2 driver to compete in Asian F3 last year, finishing third in the standings and earning superlicence points that lowered where he needed to finish in F2 to be able to race in Formula 1 – although he ended up scooping more than enough points from F2 anyway.

Jehan Daruvala, Roy Nissany and Guanyu Zhou will all attempt to boost their totals this year, but it won’t be an easy task. Especially considering none of them have raced in Regional F3 machinery before. Nissany hasn’t competed at Formula 3-level since 2014, and his F2 points tally of six (over two seasons), suggests that even with Hitech he will struggle to match Zhou and Daruvala. However given his experience, the Williams F1 test driver should still be regularly scoring points.

Renault F1 junior (or should it now be Alpine F1 junior?) Zhou is reuniting with the Prema outfit that he raced for through his Formula 4 and F3 career. After he was upstaged by Ferrari junior Callum Ilott during his sophomore F2 season last year with Virtuosi Racing, Zhou will be hoping to bounce back with a championship charge before an expected return to Virtuosi.

He’ll face stiff competition from several F3-level drivers as well as F2 race-winner Daruvala. The Indian really hit his stride at the end of his rookie F2 year to round out what was otherwise a challenging season. The 22-year-old has also had to battle a COVID-19 infection, but he should be fully fit now and with the momentum of that strong end to his F2 season behind him.

Zhou and Daruvala’s experience and prior success place them among the title favourites, but the title battle is far from a two-horse race when you consider the talent coming from the rungs below. 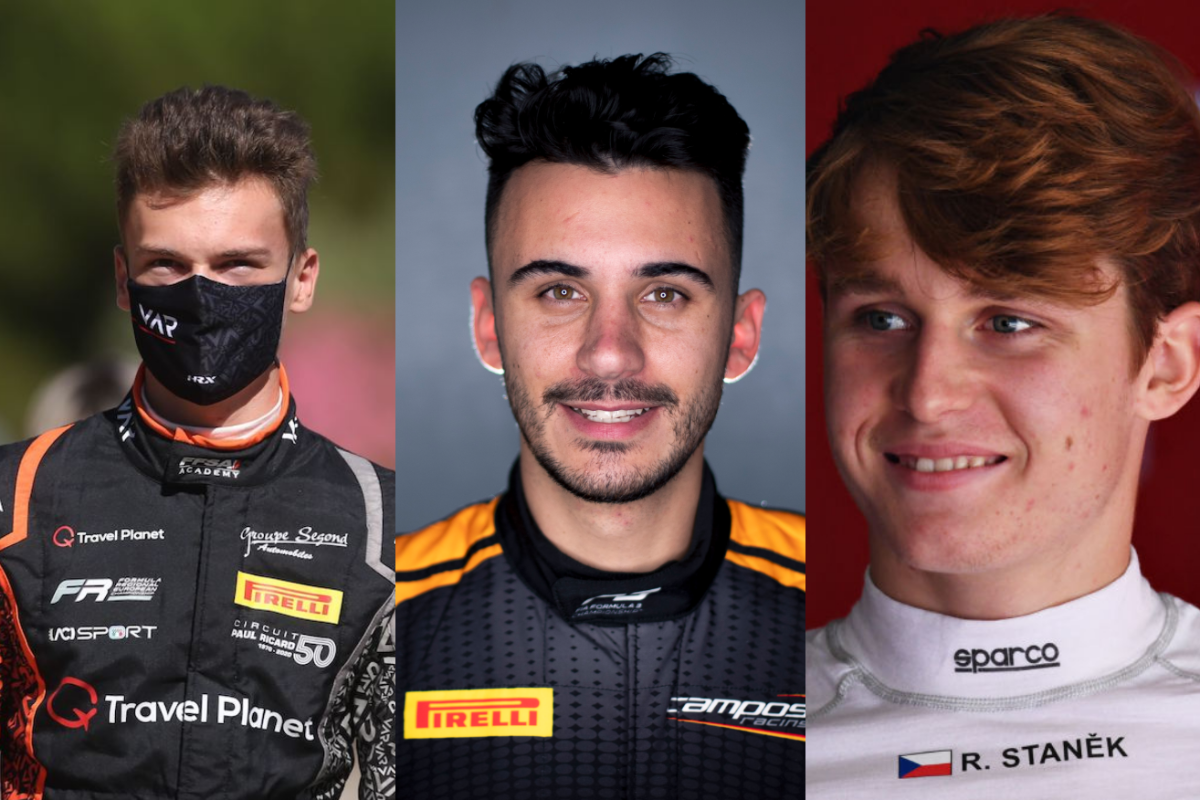 Three drivers from the 2020 FIA F3 Championship grid will race in Asian F3, with returnee Alessio Deledda among them. The Italian recently secured promotion to F2 with HWA Racelab despite never finishing higher than 16th in 34 starts in FIA F3 with Campos Racing. He placed 15th in Asian F3 last winter, behind drivers who only entered one round.

Much more is expected from his Pinnacle Motorsport team-mate Pierre-Louis Chovet, who finished in fifth place in Formula Regional European Championship last year as the second highest non-Prema driver. The Frenchman was quietly impressive during his two FIA F3 cameo appearances for Hitech too, finishing sixth in the second Monza race, and has secured a full-time FIA F3 drive for 2021 with Jenzer Motorsport. Having inexperienced team-mates in Asia won’t help his confidence though.

Pinnacle won six of the 15 races last season but just fell short in both championships. Considering the quality of the competition, the team may find it harder to replicate its title-challenging form this year.

Czech ace Roman Stanek will make his first appearance in a winter single-seater series since he made his car racing debut in F4 UAE two years ago. Since then, he’s battled for the ADAC F4 title, dropped out of a FREC campaign with Prema before the start of the season and has completed his rookie FIA F3 season at just 16 years old.

Stanek may have only scored points once last year, but don’t let that small tally fool you. He is a real talent and should be a contender for podiums if not wins with Hitech. The British outfit has won more races than any other in Asian F3, although its advantage was diminished in 2019-20, and should be among the leading teams. It’s running Stanek in FIA F3 this year too.

The Regional Formula 3 and Euroformula drivers 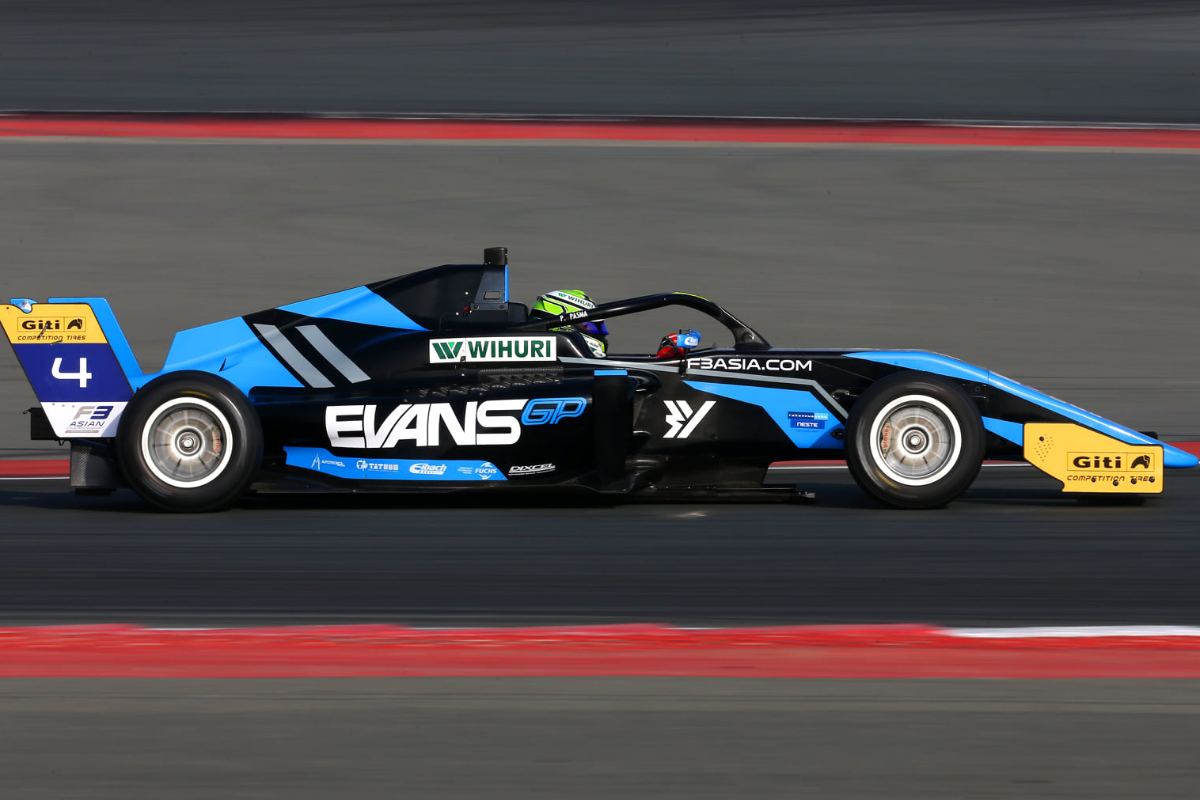 David Vidales is arguably the star of this sextet, but he’ll be sharing the third Prema car with Ferrari junior Dino Beganovic, meaning he will only be competing in a few rounds. The Spaniard made a stunning car racing debut in the Formula Renault Eurocup last year, winning his first two races at Imola, and eventually finished sixth in the points despite missing a round.

Vidales will race for Prema in FREC this year, and he’ll use his part-season in Asian F3 to start to become acquainted with the Italian behemoth. His existing knowledge of the Tatuus T-318 car from the Eurocup should be invaluable.

Patrik Pasma should also be among the leading contenders, having spent the previous two years in the same car in FREC and the Eurocup. He finished fourth in FREC in 2020 as the highest non-Prema driver and will compete for the new Evans GP outfit, who have obtained a number of personnel from BlackArts Racing, in Asia.

Cem Bolukbasi was a welcome surprise addition to the grid when he announced his deal with BlackArts. The Turkish sim racer is not just rapid in the virtual world, but in real life too as he finished second in the 2020 European GT4 Pro-Am class.

His single-seater racing experience comes to a single Eurocup appearance at Hockenheim in 2019. Bolukbasi was thrown in at the deep end but he did a decent job in tricky conditions, although he was still over three seconds off the pace in both qualifying sessions (albeit on a wet track). Having a full campaign now is a chance to properly show what he’s capable of.

Bardinon will be joined at Pinnacle by late addition Matthias Luthen, whose entry was confirmed just a couple of days prior to the start of the season. His junior single-seater experience is limited in racing miles, but he tested often in Euroformula in 2020 and also drove a GP2 car at Monza in the BOSS GP-style MAXX Formula. 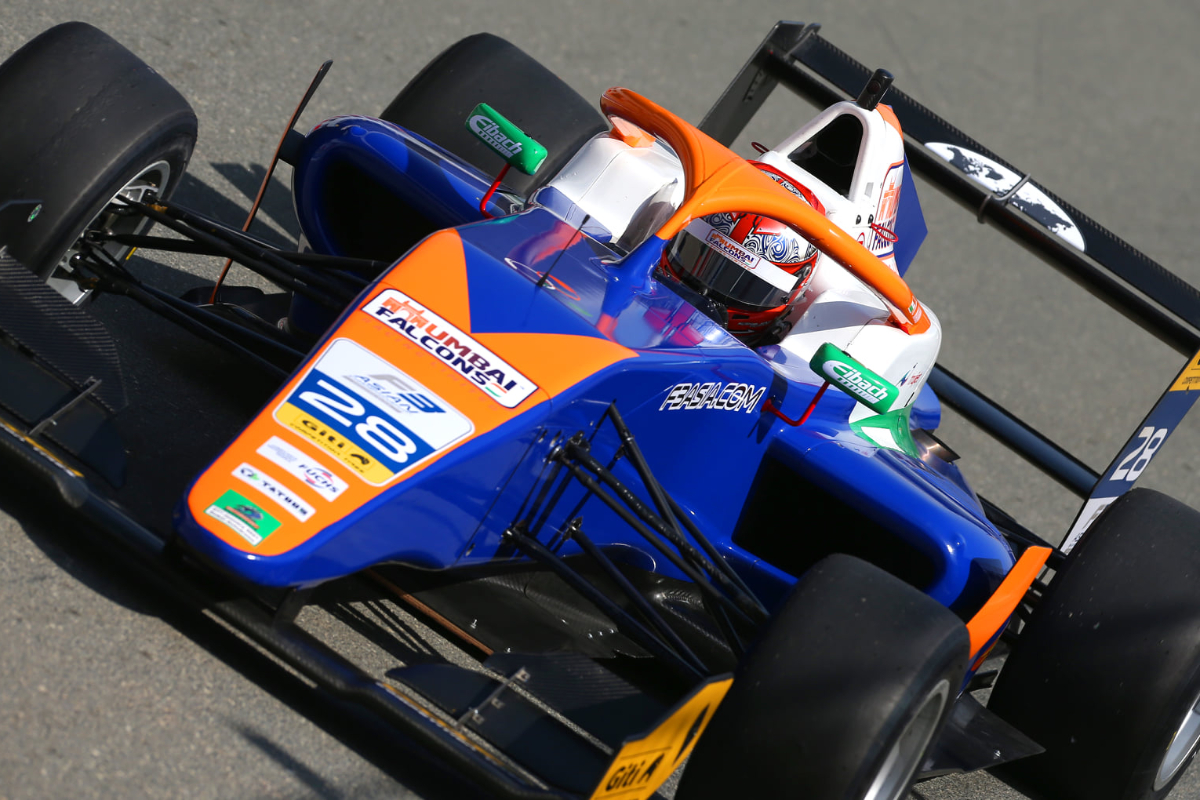 BRDC British F3 runner-up Kush Maini will line-up alongside fellow Indian Jehan Daruvala at Mumbai Falcons. The 20-year-old ace’s only downfall last year was wet weather, as a result of a lack of pre-season running for his Hitech team, but that’s something he shouldn’t have to worry about in Asian F3. He’s an experienced operator at this level, and success here will prove he’s ready to take the next step up the ladder later this year.

In fact in 2019 he raced in the Eurocup, and was the second top rookie. Expect him to be on the continent again in a few months.

Reece Ushijima, his team-mate in British F3 last year and a Hitech driver in Asia too, was supposed to race along with Maini in the final ever Eurocup season but both drivers had to cancel their programmes and switch focus to Britain.

Before his British F3 campaign, Ushijima only had a few weekends of experience in Formula Ford 1600 and the MRF Challenge under his belt, but he adapted to the F3 car well given his inexperience and took two podiums on the way to 11th in the points.

Roberto Faria did a half-season in British F3 with Fortec Motorsports, ending on a high with a podium and coming only three spots behind Ushijima in the standings. Like Ushijima, he showed flashes of potential throughout 2020 and should be capable of scoring points in the Middle East ahead of a second shot at British F3 after previously racing in British F4. 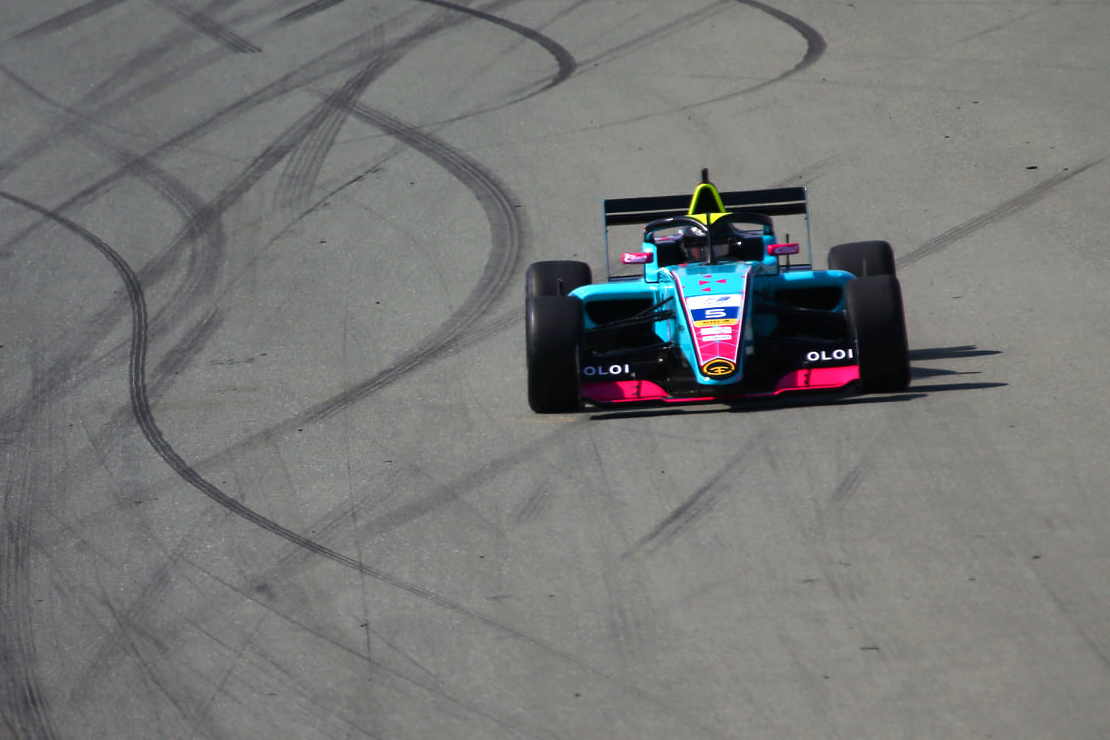 A stacked list of nine F4 graduates includes new Red Bull Honda protege Ayumu Iwasa, who has joined Hitech in Asia to warm up for a step up to FIA F3 with the team. The 2020 French F4 champion will have a number of top F2 and F3 drivers to compare himself with and the Asian F3 campaign should soften the leap from F4 to FIA F3.

There’s also Ferrari junior Dino Beganovic, who will compete in selected rounds with Prema. Those experiences should form a solid base for his progression to FREC with the team. The Swede was solid if unspectacular during his maiden car racing year.

Also gaining experience ahead of their first year in Regional F3 machinery will be Isack Hadjar, who finished third in French F4 last season behind Japanese duo Iwasa and Ren Sato. He’ll be team-mates at Evans GP with British F4 race-winner Casper Stevenson and Russian Irina Sidorkova, who will be making her W Series debut in 2021 after last season got called off.

A third Prema car will be shared by Amna Al Qubaisi – racing for the first time since winning in the Abu Dhabi Grand Prix’s F4 support race in 2019 – and her father, gentleman driver Khaled Al Qubaisi.

As well as Bolukbasi, BlackArts will field Zdenek Chovanec, Lorenzo Fluxa and Rafael Villagomez. Fluxa is arguably the most promising of the trio, having finished runner-up to Francesco Pizzi in F4 UAE last winter, while Villagomez already has race experience in Euroformula that he could put to good use.