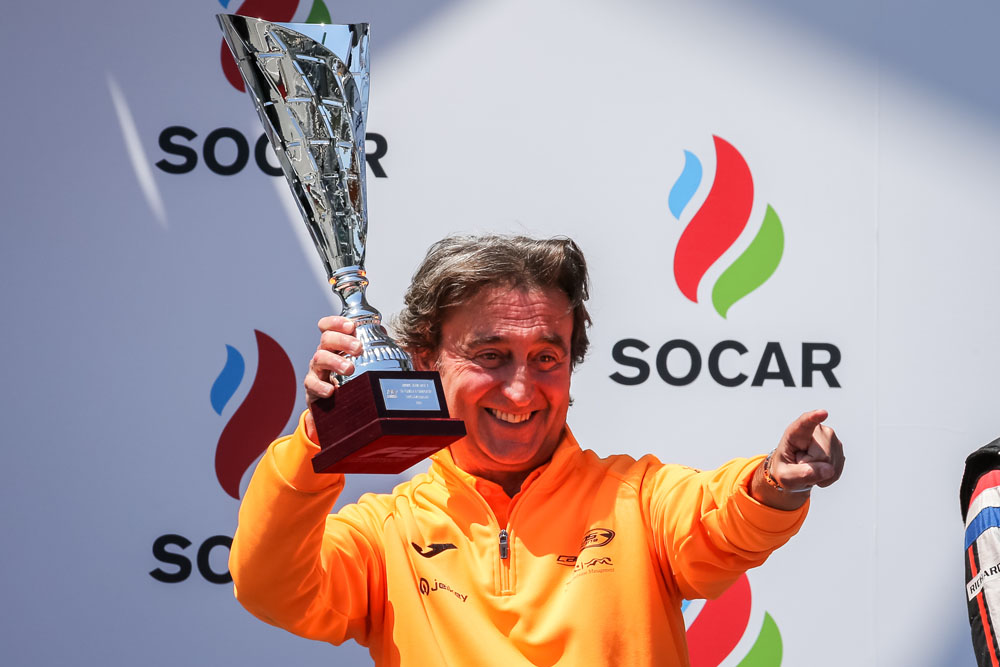 Adrian Campos, the founder and owner of championship-winning single-seater team Campos Racing, has died at the age of 60.

The news was confirmed in a statement issued by Campos Racing on Wednesday night.

“Today is the saddest day in the history of Campos Racing,” it said. “Our President and founder, Adrian Campos Suner, has left us. His heart stopped beating, but his memory will be the engine that will keep us all fighting to continue his legacy … Rest in peace.”

Campos was a trailblazer for Spanish motor racing, initially as a driver in his own right and later as a team owner and driver manager.

He raced in Formula 3, finishing third in the German series in 1985, and graduated to Formula 1 with Minardi in 1987 following a single season in Formula 3000.

Campos was a classified finisher in only one of the 16 races that season, mostly due to mechanical issues. He stayed with the team for 1988 but then left after five grands prix, having failed to qualify for his final three events.

He went on to compete in touring cars with Alfa Romeo, winning the Spanish championship title in 1994, and raced a Ferrari 333 SP prototype at the Le Mans 24 Hours in 1997.

At the end of that season Campos retired from driving and established his own team, initially entering the new Open Fortuna by Nissan series with Marc Gene and Antonio Garcia as drivers. Gene won the championship, with Campos also taking the teams’ title.

Gene immediately stepped up to F1 for 1999 with Minardi and was replaced by Fernando Alonso, who became champion with Campos in his first season of car racing. Campos continued to guide Alonso as he stepped up to F3000 and then F1.

The team continued to compete in what became World Series by Nissan until 2004, when it switched to Spanish F3. It was also one of the teams accepted into the brand new GP2 Series in 2005, where it won races with Vitaly Petrov, Giorgio Pantano and Lucas di Grassi and won the 2008 teams’ title.

For 2009, control of the team was passed to Spanish businessman Alejandro Agag – the future founder of Formula E and Extreme E – who renamed the outfit Addax.

Meanwhile, Campos hatched a plan to enter F1 with his own team as one of several new entries admitted for the 2010 season. After a promised budget cap failed to come to fruition, the project was bought out on the eve of its debut by shareholder Jose Ramon Carabante and renamed Hispania Racing.

After programmes in Euroformula and Auto GP, Campos returned to GP2 in 2014 by reacquiring Addax, and ran Rio Haryanto to fourth in the standings in 2015 before the Indonesian stepped up to F1.

Campos Racing also expanded into GP3 in 2015, and has continued to field teams in the rebranded FIA Formula 2 and F3 championships with its founder at the helm. Ahead of what would be his final race weekend as a team owner, he released F2 driver Jack Aitken to become his latest F1 graduate with Williams at the Sakhir Grand Prix.

He had also developed interests in World Touring Cars and in Formula E, where it ran the NEXTEV operation that took Nelson Piquet to the inaugural title and later the Mahindra team.

Campos still harboured F1 ambitions and announced plans in 2019 for a new entry along with business partner Salvatore Gandolfo.

After playing a key role in the development of Spain’s first F1 champion Alonso, Campos has continued to provide valuable support to young Spanish talents. He gave a single-seater bow to Alex Palou, now racing in IndyCar, and more recently helped prepare David Vidales for his winning debut in cars. He had announced a Spanish Formula 4 programme for 2021.

His son, Adrian Campos Jr, raced with the team in Spanish F3 and Auto GP up until 2011 and is now its sporting director.