The Toyota Racing Series has become the traditional curtain-raiser for the season to come in junior single-seaters, with its format of five consecutive race weekends across New Zealand making it a popular destination for drivers from around the world ahead of their main programmes for the year. We look at the contenders as things kick-off at Teretonga this weekend.

The entry list of teams has remained unchanged of 2012 but the balance of powers has shifted as this year it is M2 that seems to have the strongest lineup. Headlining it, naturally, is series champion Nick Cassidy, who will be attempting to defend the title with a new team. For Cassidy, this will be his third year in the series and, seeing how his previous record is second (2011) and first (2012), he is easily the title favourite. The disappointment of his short-lived rookie European campaign surely only served to rile him up and make him even hungrier for glory.

The other major contender who’s switched teams is Brit Alex Lynn. The 19-year-old has already raced in the series in 2011, finishing ninth in the standings with one win. This time, however, it will be quite a different matter as the youngster has plenty more experience, having raced in major F3 categories and shown frontrunning pace among some of the most promising single-seater juniors. With his 2012 achievements and prior TRS experience, it is easy to expect that he’ll be right there in the fight for the title.

Another possible force to be reckoned with, though a newcomer to the series, is Steijn Schothorst, aged 18. After a fine debut season in Formula Renault, where he took fifth in the NEC category, he will be looking to expand upon his success within a new challenge.

The 2013 season of TRS will also be the debut in car racing for Norwegian karting star Dennis Olsen. The 16-year-old won numerous titles in different karting categories and was signed by Red Bull to its simulator programme, which could ensure a rather prosperous future career should he manage to impress early on.

Australian Spike Goddard will also make his debut in the series, having spent 2012 racing in the National Class of British F3 (where he took the title). TRS could serve as a great platform for him to prove himself worthy of the main-class F3 seat he is set to occupy this year.

Finally, the M2 lineup is rounded up by Ryan Cullen who is set to debut in GP3 later this year. Cullen’s 2012 record includes sixth in the UK Formula Ford standings in his first season of car racing, with two podiums throughout the year.

The team that helped Cassidy to the title a year ago will not be running any series champions this year, but still has a very strong lineup to boot. Their title challenge is most likely to be headed by Lucas Auer, the 18-year-old JK Racing Asia series champion and nephew of F1 driver Gerhard Berger. The Austrian raced in TRS in 2012, showing immense pace but only finishing sixth due to a lack of consistency. After adding second in German F3 to his resume that very year, he is now more prepared and experienced to take on the challenge.

20-year-old Puerto Rican Felix Serralles is another contender, after a strong showing in British F3 in 2012 that saw him fight for the title until the very last round (managing third in the standings in the end). He’s also raced in TRS last year, finishing eighth in the standings and taking a win at Manfeild.

Although less experienced than Serralles, Brazilian Bruno Bonifacio also has one previous season of TRS to his name, scoring one podium and taking tenth overall in 2012. He’s followed that with by an impressive Formula Abarth campaign (with third in the European Series standings) and a podium on his one-off appearance in Formula Renault 2.0 NEC, so he should be quite a bit more competitive this year.

The experienced Pipo Derani will be making his TRS debut in 2013. Also from Brazil, the 19-year-old has been racing cars since 2009, his best results being two podiums in Formula Renault 2.0 NEC and two wins in his second season of British F3.

Finally, 17-year-old Canadian Nicholas Latifi is the fifth man in the Giles Motorsport lineup. 2012 was his rookie season in car racing, with the youngster finishing seventh in the now defunct Italian F3, taking one win and four podiums along the way. 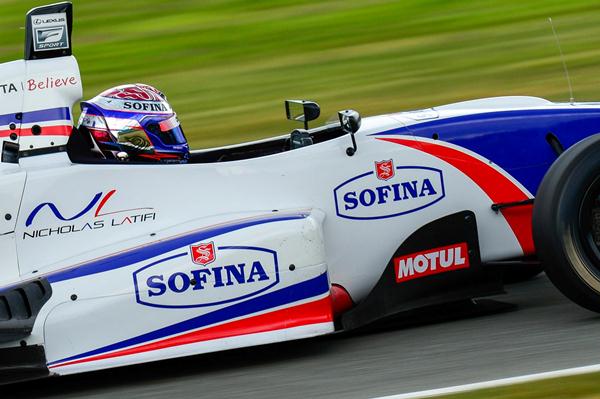 Latifi is expected to race in British F3 this year (Photo: TRS/Bruce Jenkins)

Another team with five entries, ETEC’s lineup doesn’t quite pack the punch seen in those of M2 and Giles, but still has a couple of names that might intervene in the title fight. Perhaps the most exciting of those is Jann Mardenborough, a driver with no previous single-seater experience to speak of. Mardenborough spent 2012 racing in British GT (finishing sixth in the standings) after winning the PlayStation GT Academy in 2011. TRS is supposed to be his preparation for a step-up to Le Mans Prototype racing, but impressive F3 tests for Carlin have led to speculation his future could be in single-seaters. His times in testing have suggested he’ll be a factor in the title fight in this particular series.

Also making her TRS debut is Tatiana Calderon, who, at 19, has previously raced in the Star Mazda Championship before switching to Europe. In 2012, she participated in European F3 Open, where she finished ninth in the standings. Her plentiful experience should make her a regular points-scorer.

Another series newcomer is Malaysian Akash Nandy who, at 16, already has two years of car racing behind him. Over 2011 and 2012, he has scored a total of five podiums in the JK Racing Asia series and taken part in certain Formula Pilota China rounds.

Yet another rookie is Singaporean Andrew Tang. TRS will be his first single-seater series out of karts, as planned by McLaren, who are reportedly overseeing his junior career.

Finally, the only man on the ETEC lineup to have raced in TRS before is Tanart Sathienthirakul. The Thai 20-year-old finished the 2012 season of TRS in 14th and went on to participate in Formula Renault 2.0 NEC and the Race of Champions.

Finally, the last team on the roster is Victory, whose lineup is rather downsized from 2012. For 2013, Victory went for two drivers instead of four. One of them, Damon Leitch, has been retained by the team from 2011 and 2012. In this year’s lineup, his experience in the series is only rivaled by Cassidy, and Leitch, having finished third in 2012, could also have a very good shot at the title.

Alongside him, Victory will also run rookie Michael Scott, for who this will be the first proper open-wheel outing. He’s done well in local Formula Ford series in 2012 and might impress on his debut.

We will have full coverage of the Toyota Racing Series at both PaddockScout.com and @PaddockScout on Twitter.