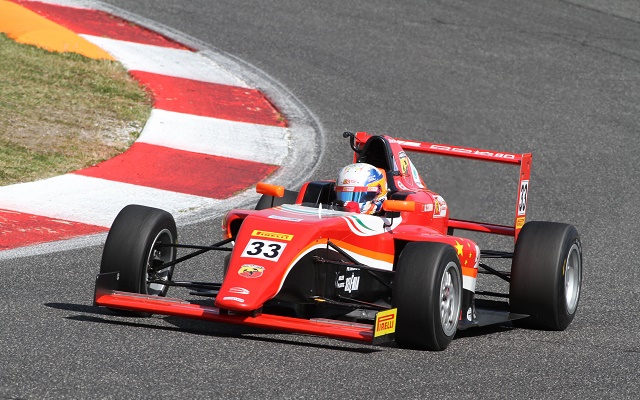 Prema Powerteam drivers Ralf Aron and Guanyu Zhou have topped the two respective qualifying sessions of the first Italian F4 round at Vallelunga.

Aron will lead Ferrari junior Zhou on the front row for race one, while the Chinese debutant has pole for the final race of the weekend.

The Estonian recorded the best lap of the round so far on his way to pole position, clearing Zhou by two tenths.

Antonelli’s Joao Vieira, who set the pace in Friday practice, will line up right behind the Prema drivers, with Robert Schwartzman joining him on row two.

Third Prema rookie Giuliano Raucci was just a hundredth off Schwartzman in fifth, ahead of karting graduates Mauricio Baiz and David Beckmann and former Formula Renault 2.0 racer Marcos Siebert. Marino Sato and Diego Bertonelli made up the top ten.

Vieira came close to disrupting the domination of the reigning teams’ champions in session two, but came 0.03s short of Zhou’s early benchmark. Beckmann took third, half a second down on the Chinese driver and just 0.002s ahead of Aron.

Raucci made it three Prema cars in the top five yet again, leading Siebert, Matteo Desideri and Schwartzman.