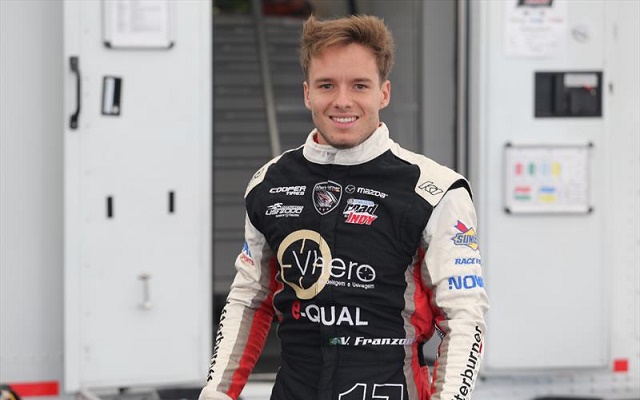 Leading USF2000 driver Victor Franzoni will step up to Pro Mazda with M1 Racing for the Indianapolis double-header.

Franzoni, 19, will join M1 Racing’s Expert class driver Jay Horak, who recorded a best finish of ninth in the season opener at St. Petersburg. Horak is also the CEO of AutoEnginuity, who will back the Brazilian’s Mazda switch.

A former Formula Renault 2.0 racer, Franzoni has been a part of USF2000 since the 2014 Winterfest.

He racked up five wins in the category since then and finished his debut season in fifth, where he also currently sits in the 2015 standings.

“Victor is what a sponsor hopes to find to showcase their products ? a top-tier driver who is well mannered and professional,” added Horak. “What he strives for in his racing career, we do in our products”

“We are a great fit. I think this is just the beginning of what should be a long relationship. We are very excited to be part of his path to the top.”

The duo will be joined at Indianapolis by New York racer Carlos Conde, who will run alongside Horak in the Expert class. Conde is a race winner in North American Ferrari Challenge’s Pirelli AM class and has contested Pro Mazda on and off since 2008, taking a best finish of ninth and the Masters title in 2010.