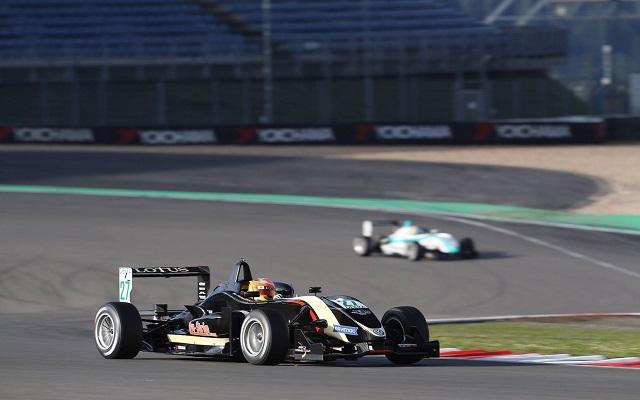 German F3’s runaway championship leader Markus Pommer continued his march towards the series’ title with his eighth victory of the season in race one at the Nurburgring.

The Lotus driver was fully in control in the race, aided by the fact that four potential frontrunners were penalized early on due to jump starts.

Indeed, at the start, it was blatantly obvious that some early getaways were taking place, as Weiron Tan unexpectedly lunged from fourth on the grid and took the lead.

Pommer himself was slower off the line than fellow front row starter and teammate Indy Dontje, but managed to stick his car round the outside of the Dutchman to take the inside line into turn two.

Tan led during the opening laps, but soon got a drive-through penalty for jumping the start. It appeared, though, that his unexpected early launch prompted a chain reaction, with three other drivers picking up drive throughs for the same reason – his teammate Sam MacLeod, SMP’s Nikita Zlobin and, surprisingly, Lotus driver Dontje.

With all of that settled, Pommer emerged as the clear leader of the race – already four seconds up the road from nearest rival Nabil Jeffri after ten minutes of racing.

There would be no further action in the fight for the lead, as the German controlled the remainder of the race, finishing eight seconds in the clear.

Jeffri settled for second, while JBR’s Nicolai Sylvest benefitted from his own clean start to secure a well-deserved third.

Impressively, Tan fought his way up the field after his penalty and eventually ended up fourth, having passed both debutant Kang Ling and Thomas Amweg on the penultimate lap.

Amweg then overtook Ling into turn one of the final lap to claim a career-best fifth, with the series newcomer settling for sixth place.

Dontje’s and MacLeod’s respective recovery drives went much less smooth than Tan’s. First, Dontje ended up making contact with teammate Andres Mendez in turn one, which sent the Colombian into a spin.

MacLeod then caught up with Dontje and attempted to overtake the Dutchman for seventh place in the final laps of the race. He managed a move into turn one, but Dontje attempted to remain side-by-side with the Scotsman into T2, which resulted in a collision.

MacLeod spun around, but managed to continue, eventually finishing seventh – while Dontje retired up the road with suspension damage.

Mendez recovered from his spin to take eighth, keeping Zlobin at bay, while Maximilian Hackl and Luca Iannaccone rounded out the order.

UPDATE: Sam MacLeod has received a post-race penalty of 30 seconds added time, which demoted him from seventh to ninth. As such, Nikita Zlobin was promoted to reverse-grid pole for race two.