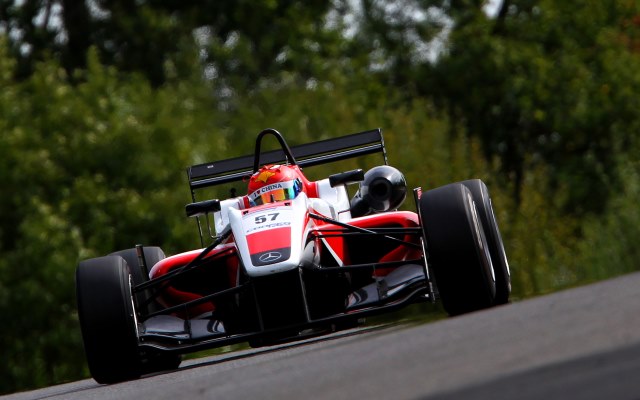 American teenager Ferrucci will start his first British F3 race from pole courtesy of a quickest second-best lap, pipping Cao in that classification by just 0.023s.

Ferrucci appeared to have done enough for a double pole with his own last lap, but Cao managed to go two tenths of a second quicker and the Chinese driver will therefore head the field for the weekend’s third and final race.

Sole Carlin entrant Peter Li was out on track earlier than the Fortec drivers and did enough to take third for races one and three, restricting championship leader Matt Rao to a pair of fourths. Rao had just a four-point lead over team-mate Cao coming into the weekend.

Camren Kaminsky edged out Double R team-mate and F3 newcomer Dan Wells to take fifth in the times, but Wells will start ahead in race one thanks to a second-best time that was 0.003s quicker. Max Marshall completed the seven-car grid having done a deal to do a second straight weekend with Double R, this time in an older-spec F308 chassis.