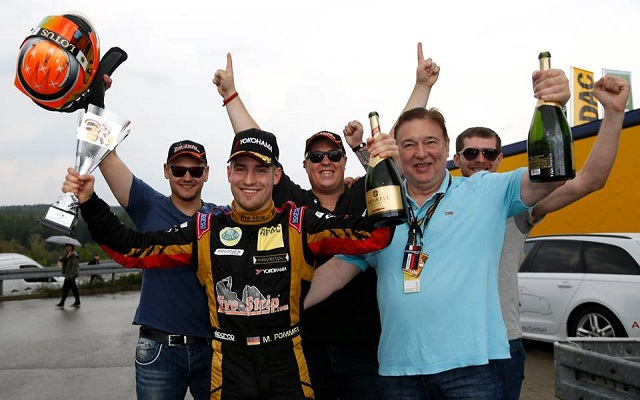 Lotus driver Markus Pommer became the 2014 German Formula 3 champion today, securing his title with a confident win in race one at Sachsenring.

Pommer, who picked up the third consecutive German F3 drivers’ title for Motopark-operated Team Lotus, won his 12th race of the season under torrential rain.

The race start was delayed by ten minutes due to barrier repairs and that proved just enough time for the track to be hit with a huge shower. As such, the organizers started the proceedings under the safety car.

The safety car period continued for the first ten minutes of the race but green flag racing did finally arrive after that with Pommer comfortably holding on to the lead at the restart.

The German driver went on to build up a solid cushion to the opposition – one that he would successfully manage for the remainder of the race.

Behind him at the restart, Van Amersfoort Racing’s Sam MacLeod immediately came under severe pressure from Nabil Jeffri. Soon, the Scotsman wound up making a mistake and went off into the gravel, rejoining in seventh as the Malaysian took second.

From that point on, Jeffri appeared to fall further back from Pommer, getting almost within reach of third-placed Weiron Tan.

However, Jeffri soon got on pace with the race leader and comfortably held second. His compatriot Tan went on to secure third.

Further back in the field, Nicolai Sylvest and MacLeod were charging through the field. The duo first caught up to ADM’s Pipo Derani and, after a couple of laps of battling, both ended up passing the Brazilian.

They then reeled in fourth-placed Indy Dontje and, as the Dutchman kept Sylvest at bay during the final minutes of the race, the Dane slipped behind MacLeod. Just then, however, an off for Derani brought out the red flag and, with two minutes on the clock, the race was over.

The results were rolled back to the end of the previous lap, with Sylvest getting fifth ahead of MacLeod. Derani was restored to seventh, just ahead of squadmate Nikita Zlobin.