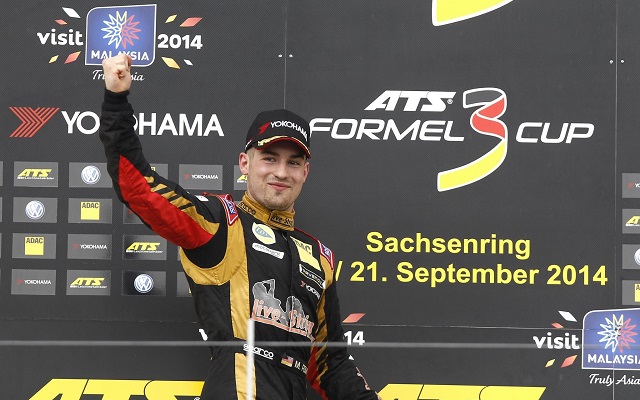 German F3 champion Markus Pommer took his 13th victory of the season in the third race of the penultimate round at Sachsenring.

When polesitter Sam MacLeod stalled off the line, Pommer jumped into the lead off the front row and would not give up the lead for the remainder of the distance.

It wasn’t an easy victory for the German, however, as he came under pressure from two Van Amersfoort Racing drivers during the wet race.

Early on, Pommer had to manage the gap to Malaysian Weiron Tan, who stayed within three seconds or so of the leader and eventually spun out shortly after the halfway point of the race.

Tan rejoined in third, behind MacLeod, who drove a superb recovery race after his startline stall and managed to get within 2.7s of Pommer at the checkered flag, having also set the fastest lap of the race.

With Van Amersfoort Racing drivers locking out the lower steps of the podium, Indy Dontje had to do with four place, while Pipo Derani sealed the best result of his return to F3 racing with fifth.

Nicolai Sylvest was sixth, ahead of Nikita Zlobin, Nabil Jeffri and Maximilian Hackl, with Andres Mendez and Luca Iannaccone finishing as lapped cars.