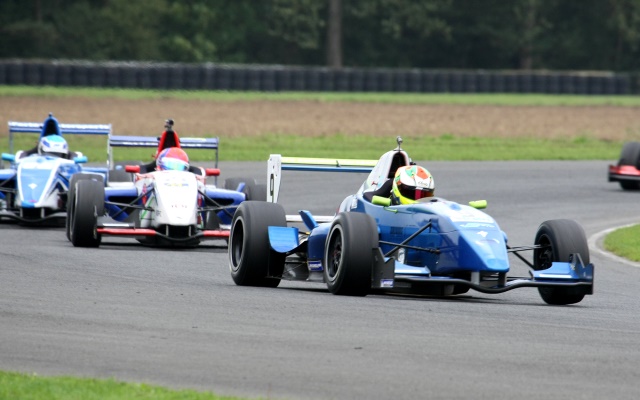 Fittipaldi had taken the lead at the start of the race, as pole-sitter?Matteo Ferrer fell to fourth on the opening lap behind Colin Noble and Alex Gill. The race was red then flagged after a second-lap clash between Tarun Reddy and Patrick Dussault.

On the first lap after the restart, Noble had a go at taking the lead from his MGR team-mate Fittipaldi but ran wide, enabling Hickin to surge through into the lead. Fittipaldi stayed second, while Noble dropped to fourth behind Gill.

Hickin pulled away from Fittipaldi at first, opening up a two second gap, but the Brazilian did come back at him late on, finishing just 0.375 seconds behind.

After falling to fifth early on, Ferrer got himself back ahead of Noble and then Gill to complete the podium in third. TJ Fischer took fifth away from Noble, who sustained front wing damage, and Jack Butel completed the seven finishers.

Beating Hickin to the fastest lap and two bonus points, Fittipaldi has extend his championship lead to 75 points with 102 still available.