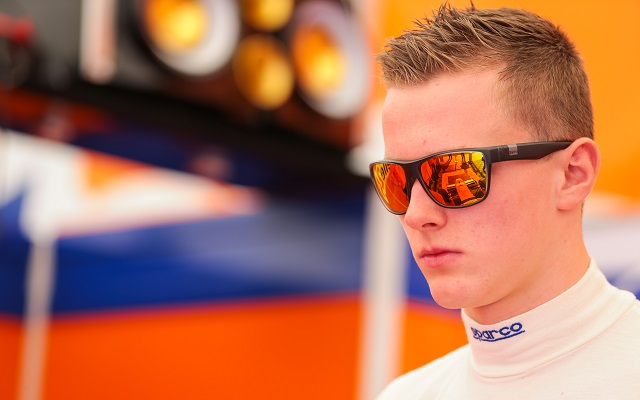 Mucke Motorsport’s Maximilian Gunther managed to salvage a victory from a difficult weekend in the ADAC Formel Masters race three at Sachsenring.

Gunther started the race from reverse-grid pole and stayed in control during the brief green-flag racing periods to take the checkered flag in first.

The race was held on an extremely wet track and, as such, the first ten minutes of the event were run under the safety car.

Once the green flag came out, Gunther assumed the lead, whilst second-placed Fabian Schiller endured a trip through the gravel, losing the spot to another Mucke driver Marvin Dienst.

Shortly afterwards, the safety car was back out again to remove the stranded cars of Dennis Marschall and Kim-Luis Schramm.

The SC was in with five minutes remaining on the clock, setting up an exciting finish. However, the two Mucke men out front controlled the situation and drove calmly to the checkered flag, delivering a 1-2 for the Berlin-based team.

Rookies Igor Walilko and Tim Zimmermann and newly-crowned series champion Mikkel Jensen were the central figures of a thrilling late battle for third. Yet, on the final lap, Zimmermann ended up spinning his car around and was out of the fight, settling for fifth.

It was then that Jensen caught up and overtook Walilko for third, only to see the Pole take the position back into the final corner and at the line.

Behind them, Giorgio Maggi secured his best finish in ADAC Formel Masters in sixth, ahead of Schiller, Ralph Boschung and Nico Menzel, with Joel Eriksson bringing up the top ten.