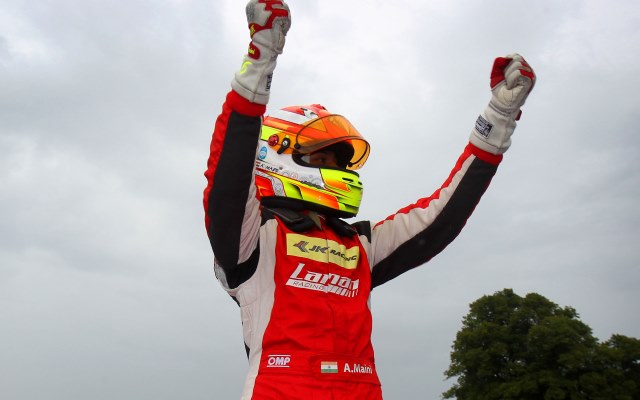 Arjun Maini inherited victory in the third and final BRDC F4 race of the weekend, and with it the championship lead, after George Russell and Raoul Hyman collided again.

Russell, who had led the standings since the first round of the season, led the race for the first two laps after starting from pole position, with Hyman in second.

But they both failed to complete the third lap, enabling Maini to take the lead with a 2.5-second gap over Struan Moore. A wide moment from Maini on lap six then eliminated his advantage, before Diego Menchaca took second place away from Moore.

The Mexican chased the Indian home, but Maini held on up front to give himself a 21-point lead.

Jordan Albert scored his first ever podium in third ahead of Charlie Eastwood and Rodrigo Fonseca, who ensured that all three Douglas Motorsport cars finished inside the top five.

Rahul Mayer was sixth, ahead of Connor Jupp and Alfredo Zabalza, with Sennan Fielding ninth and Moore ending up in tenth. Fielding had collided with HHC team-mate Will Palmer on lap two when fighting over third, putting the latter out of the race.