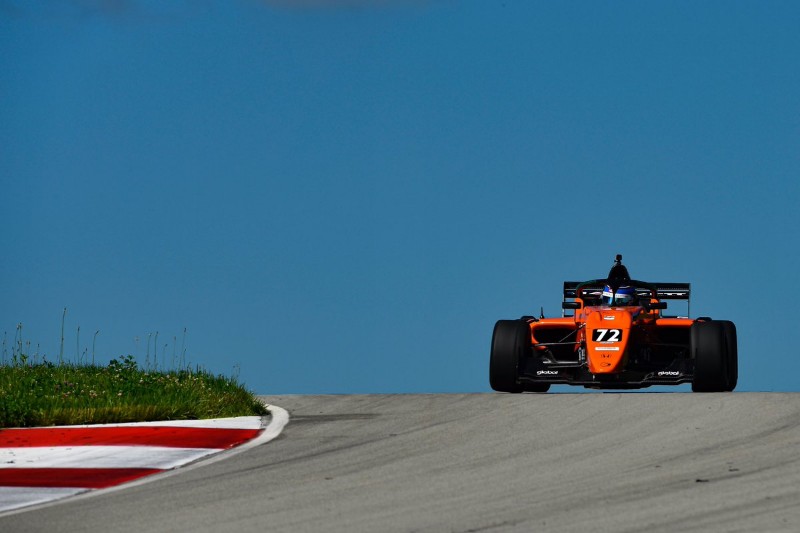 Dakota Dickerson moved into the Formula 3 Americas lead at Pittsburgh with three wins, where drivers looking to succeed him as United States Formula 4 champion also continued their season.

Leguizamon jumped the wheelspinning Abel at the start of race one, as Dickerson pulled away up front. A safety car caused by the stationary Kent Vaccaro meant Dickerson’s lead was eradicated, but he established himself up front again, leading a GRG one-two ahead of Leguizamon.

Abel completed the podium, and the top three were the same in the second race. John Paul Southern Jr put Abel under pressure for much of the race, and their battling allowed Lall to close in. With just a few laps to go, Lall sliced past Southern and hassled Abel to the flag.

Lall joined Dickerson on the front row of the final race, but had no answer to the pace of Dickerson and Leguizamon. Mathias Soler-Obel took his best finish of the season in fourth, while Abel started in sixth and finished a pointless 11th.

A win and two other podiums for Joshua Car put him in the US F4 lead, although it was Kiwi Motorsport team-mate Arthur Leist who had the momentum at the beginning of the weekend after taking pole, victory and fastest lap for the first race.

An early safety car meant Leist was kept under pressure by DEForce Racing’s Kiko Porto, but once Car started attacking for second it enabled Leist to pull away up front. Jose Blanco-Chock ensured a Kiwi Motorsport podium lockout by following Car in passing Porto, with Teddy Wilson completing the top five.

Porto and Brooks were the stars of the second race, with Car just edging Dylan Tavella to third. Leist was fifth, while car problems shortened Blanco-Chock’s race.

Car and Tavella fought again – this time for the win – in race three, while multiple drivers diced behind for third. Late in the race Tavella dropped into that battle, with Car ending up leading Brooks home. Blanco-Chock and Porto completed a close top five, while Leist’s fighting run failed to go to plan and he ended up 12th.