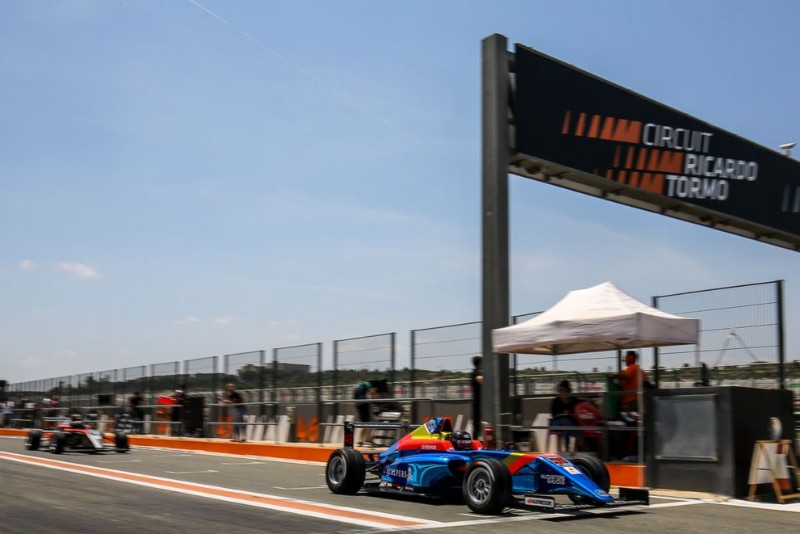 Franco Colapinto stormed back into the Spanish Formula 4 lead with three wins at Ricardo Tormo.

The Fernando Alonso protege took pole for the weekend opener, but missed the stating lights entirely and fell to fourth. He had already reclaimed third from Tijmen van der Helm on the first lap, and on lap five of 17 went down the inside of Carles Martinez for second place.

Killian Meyer was leading at this point, but his 2.2 second advantage was quickly eradicated. It took 10 laps before Colapinto made his move though, using Turn 1 again and benefitting from Meyer going wide. He pushed from there to take a 2.860s victory, with Praga F4 team-mates Meyer and Martinez completing the podium.

Colapinto wasted pole again in race two, but the retirement on lap 3 of leader van Berlo meant Colapinto had an easy run to the flag ahead of Meyer again. Van der Helm took third with a last lap move on Martinez, while Shihab Al Habsi followed his pointless race one with sixth.

Van Berlo started race three from pole, but it was Colapinto who led into the first corner. They maintained those positions, while Rashed Ghanem and Al Habsi lost third and fourth to drive-through penalties for jumped starts.

Meyer inherited third after overtaking Axel Gnos, who then span down to 12th. Al Habsi was even lower down the order, and then caused a late safety car with his own spin.

Jonas Lindhard Nielsen moved into the Danish F4 lead at Ring Djursland thanks to Mikkel Grundtvig being absent, but it was Malthe Jakobsen who made the biggest impact with two wins.

Jakobsen and Nielsen fought hard for race one victory, with Jakobsen taking pole and Nielsen fastest lap. Largim Ali upstaged them with race two victory, but they were back up front in the final race which Jakobsen dominated.

The relaunched F4 SMP continued at Smolensk Ring, where Pavel Bulantsev reclaimed the points lead after two close battles with former Formula Renault Eurocup racer Alexander Vartanyan. Bulantsev prevailed in the first encounter by less than a second, with Vartanyan striking back with a similar margin in race two.