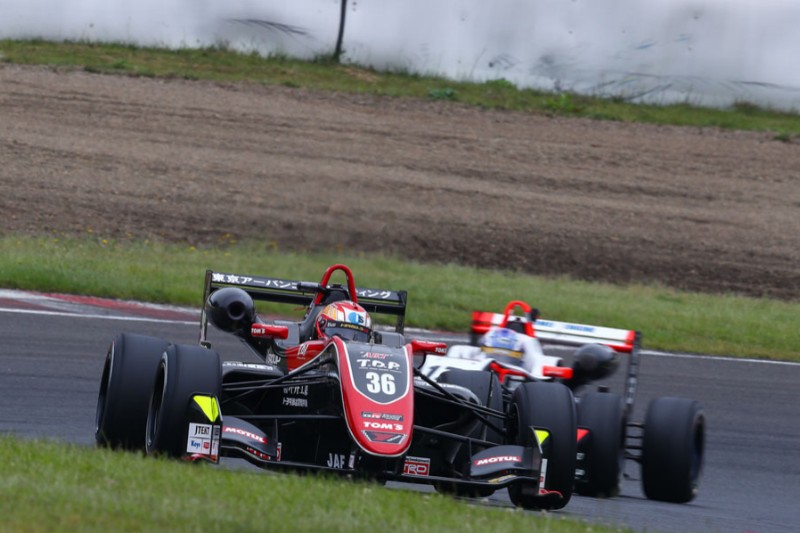 Ritomo Miyata closed the gap to Sacha Fenestraz in the Japanese Formula 3 standings after he and Toshiki Oyu won at Sportsland SUGO.

The poleman wasn’t troubled during the first race, despite the safety car having to be deployed early on due to a collision further down the field.

After the restart he was able to sweep up both the race victory – finishing over six seconds ahead of team-mate Kazuto Kotaka – and the fastest lap to give him maximum points for the race.

Fenestraz only qualified fifth and fourth for race one and two respectively. However at the start of the first race, he was able to stay alongside team-mate Enaam Ahmed on the outside line for the first two corners before making the move stick for fourth into Turn 3.

He moved up into the third after the restart when he got by Okayama Team’s Charles Milesi at Turn 1. The first corner was also where Fenestraz moved into third place ahead of Kotaka at the start of the second race.

Miyata had the chance to win the second race, but Toda Racing driver Oyu got a great start and took over the lead immediately. The 20-year-old held on to take victory, his first since racing in Japanese Formula 4 in 2017.

Finishing just 0.306 seconds behind was Miyata, who took another point for fastest lap. Fenestraz finished third again, but has now had his championship lead reduced to 19 points.

Ahmed was able to outqualify Fenestraz for the opening race, but after losing the place to his team-mate at the beginning of the race was passed by both Hiroki Otsu and Oyu one lap later.

He eventually finished sixth, although in race two he was able to take advantage of Fenestraz’s pass on Kotaka at the start to also get by and move up to fourth.

Despite running in third for half of race one, Milesi was forced to enter the pits and retire the car not long after being passed by Fenestraz. Milesi also didn’t take part in the second race.