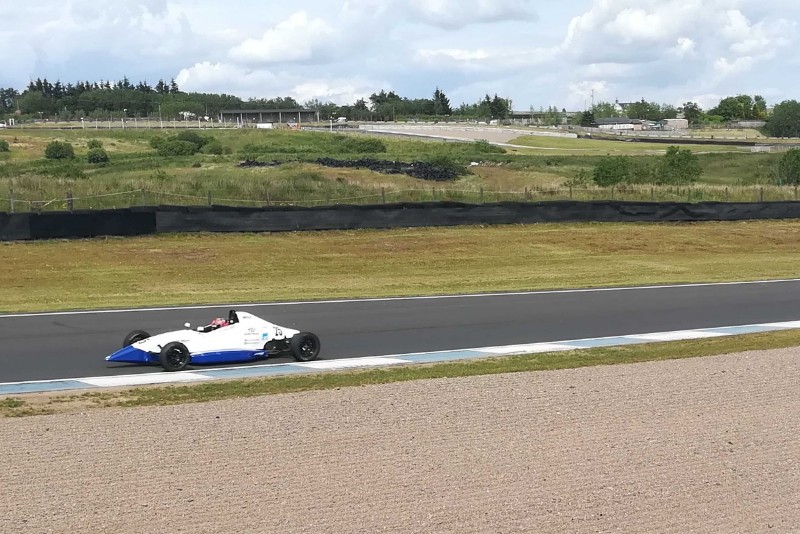 The guesting Neil Maclennan took both Scottish Formula Ford 1600 wins at Knockhill, although it was Jordan Gronkowski who reaped the rewards in the points.

Kevin Mills Racing brought its BRSCC National FF1600 regulars Maclennan and Michael Macpherson to the June round of the Scottish season, and 2016 champion Maclennan immediately looked at home by beating points leader Gronkowski to pole.

Maclennan got a clean getaway from pole and was then unchallenged in the first race, winning by 7.647 seconds.

Gronkowski took maximum points in second place, prevailing in a race-long battle with Macpherson and Neil Broome. Although beating Macpherson to third had no effect on the result, Broome was second of the points-scoring drivers.

Series debutant Glenn Alcock finished a lap down on his first outing with Cloan Motorsport, a team that has been out of the championship for several years.

Maclennan beat Gronkowski off the line again in the second race, and once again pulled away for a second success.

Gronkowski kept up initially, but elected to look after his tyres late on and dropped back. Machperson finished behind in third, ahead of Rotor Racing’ Kenny Cowie.

Cowie spent much of the race in a titanic squabble for fourth place with Broome and Matt Chisholm.

Both Broome ? running a brand new engine following his blow-up in the May reverse layout round ? and Cowie exchanged places regularly, with Broome using his extra power to divebomb down the inside of the Hairpin.

Ultimately, it all came to nought for Broome, who was penalised 10 seconds post-race for exceeding track limits. This allowed Chisholm to inherit fifth at the finish, ahead of Graham Brunton Racing?s Logan Hannah and Steve Barlow. Alcock again finished a lap down in ninth.