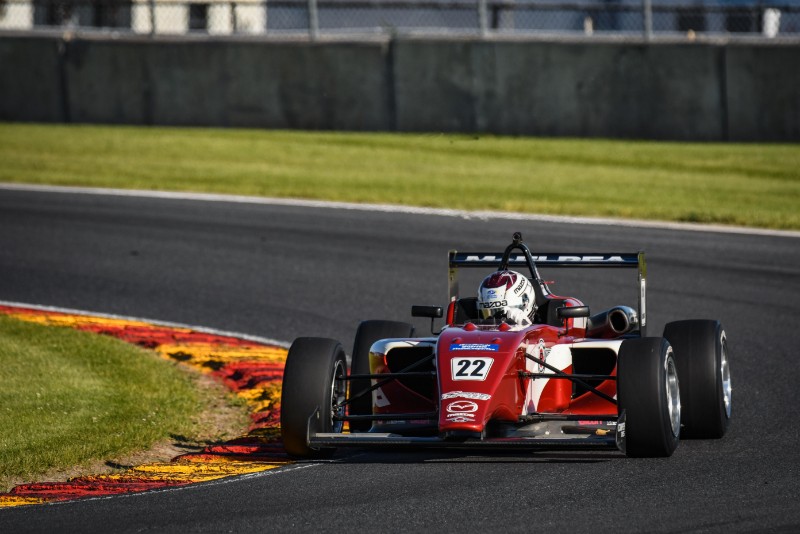 McElrea hold off Pabst Racing team-mate Colin Kaminsky in a duel for his first victory, taking the lead with an early move at Turn 1, as multiple cars were caught up in a first corner incident.

Cape Motorsports? Darren Keane was left limping back to the pits while Legacy Autosport’s Alex Baron was also involved.

Having been one of those who had benefited most from the incident at the start, Christian Rasmussen was taken out with just a handful of laps remaining in an incident with Jak Crawford.?The latter earned himself a 30-second penalty for the crash, dropping him to 14th.

McElrea led Eves into Turn 1 from his race two pole position as the field emerged unscathed from the first few corners.

Eves then forced his way into the lead, with the battle for the positions behind heating up in the final laps. In total, four of the top six traded places – with Keane relieving McElrea of second on the penultimate lap. Kaminsky finished fourth.

Third for McElrea means he’s now 41 points behind Eves, who has picked up five wins this season.

Matt Round-Garrido joined BN Racing from Jay Howard Driver Development ahead of Road America, and qualified an impressive eighth for race two. He was shoved wide halfway through the opening lap, but managed to remain in the top 10, while team-mate Anthony Famularo had his race ended just a few laps in by a car problem.

Championship frontrunners Baron and Manuel Sulaiman both disappointed after clashing into each other, meaning they are now around 100 points behind Eves.

Christian Rasmussen had fought his way up to second in race two until a spin at Turn 5 relegated him back to fifth.