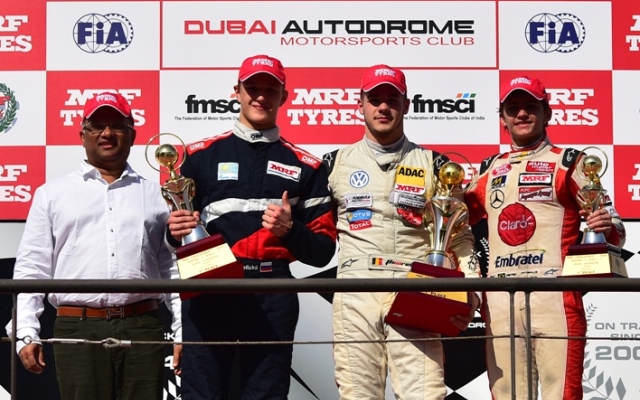 Alessio Picariello notched up his fourth MRF Challenge win in the third race of the Dubai event, before Pietro Fittipaldi won the finale to extend his points lead.

The 2013 ADAC Formel Masters champion Picariello led from pole in race three ahead of Nikita Troitskiy, before a safety car triggered by a crash for Dylan Young.

New Fortec Formula Renault 2.0 recruit Troitskiy took the lead after the restart, but when the race was red-flagged on the same lap for an collision between Arjun Narendran and Mathew Draper, Picariello was declared the winner.

Prospective Van Amersfoort Formula 3 racer Newey took the lead at the start of the final race from reverse-grid polesitter Walkinshaw, but was judged to have jumped the start and was eventually black-flagged for not serving a drive-through penalty.

Fittipaldi took over the lead and won by a second over Picariello, with Troitskiy passing Calderon for third.

The Russian was later excluded for failing a ride-height check, not only giving Calderon the final podium place but also dropping him behind the Colombian to third in the points race.

Fittipaldi, who arrived in Dubai after testing in Formula 3.5 V8 with Carlin in Barcelona at the start of the week, now has an 18-point advantage over Calderon with Troitskiy a further 13 back and just three ahead of Picariello.

Nerses Isaakyan came through to finish fourth, while there was a collision behind between Fewtrell, Reddy and Alesi that dropped all three out of contention.