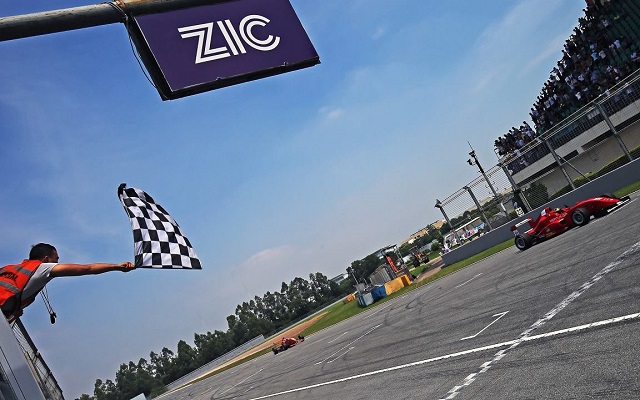 Meritus GP driver Jake Parsons took his second Formula Masters China win in the second race of the fifth round of the 2014 season at Zhuhai.

The Australian had won race one on the road, but was slapped with a penalty because of a jumpstart. There was no denying him on Saturday, as he got a strong start from fifth on the grid and was immediately on the tail of polesitter Yin Hai Tao, who lined up first by virtue of taking the fastest lap in race one.

The pair battled for the lead for several laps, until Parsons finally found his way past Yin on the last lap. The Zen driver took second ahead of his teammate Ronald Wu in third.

A close four-way tussle for seventh place was won by Andersen Martono, ahead of Eurasia’s Chinese duo of Yuan Bo and Pu Jun Jin, with Daniel Woodroof making it three Meritus cars in the top ten.

Championship leader James Munro and his nearest rival Matthew Solomon both retired from the race after tangling with each other early on.