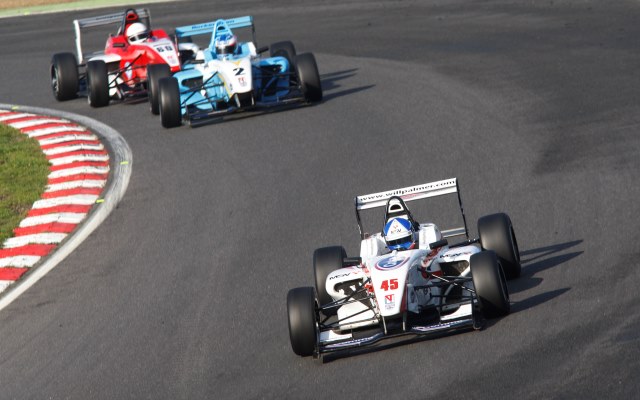 Will Palmer secured his first win in single-seaters with a controlled drive from pole position in the first BRDC F4 Winter Championship race at Brands Hatch.

After retaining the lead at the start, Palmer gradually opened up a one second gap over second-placed Matty Graham before the safety car came out on lap six after Gosia Rdest stopped in the gravel at Clearways.

Palmer made a good restart but then began to be reeled in by those behind. The HHC driver responded however, stretching his lead to 1.5 seconds on his way to the chequered flag.

“That was a great race,” he said. “At the start I managed to just hold off Matty into the first corner and then got my head down before and after the safety car. At one point he had me under a lot of pressure but I kept on putting in quick times. The following drivers were having a good scrap and I managed to pull out a nice gap in the final stages and take the win. We start third for race two now, and hopefully that means I can get another podium.”

Graham’s second place extended his points lead to seven over Jake Cook, who held off Sennan Fielding to finish third. Kieran Vernon finished fifth on his category debut, while Pietro Fittipaldi was sixth after a spin.

Matteo Ferrer was seventh ahead of Falco Wauer, Fredrik Johansen and the final finisher Dimitris Papanastasiou.