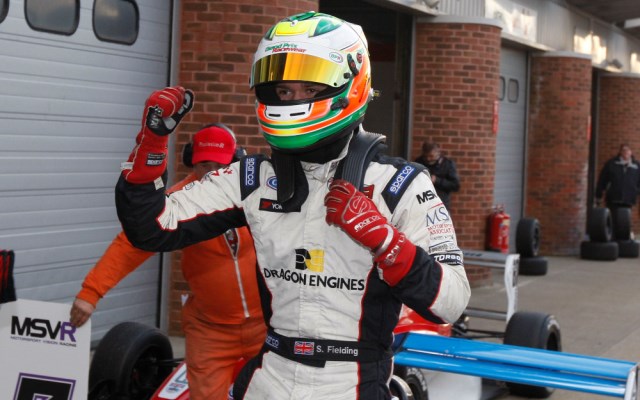 Sennan Fielding claimed victory in the second race of the BRDC F4 Winter Championship round at Brands Hatch from pole position.

Fielding stayed ahead of Kieran Vernon at the start and then eased away up front, winning by 3.4 seconds.

“It’s great to finally take my first win,” said Fielding, whose regular season came to an early end with budget issues. “I got a good start but I saw Kieran was quite close behind me and I just got my head down from there.

“From lap eight, my lap times were within a tenth of a second of each other all the way until the end and we got the fastest lap as well. Big thanks to everyone at HHC for doing such a top job. It feels so good to be out in the car, and now we’ve had the first win hopefully we can get some more tomorrow. We’re in the title fight now so we’ve just got to play it by ear and do our best tomorrow and see how it pans out.”

Series debutant Vernon held off race-long pressure from Jake Cook to second. Third was still enough for Cook to close the points gap to Matty Graham – who finished one place further back in fourth – to five with two races remaining. Fielding is only four further behind.

Pietro Fittipaldi finished in fifth ahead of race one winner Will Palmer. Matteo Ferrer took seventh ahead of Gosia Rdest, Fredrik Johansen and Dimitris Papanastasiou. Falco Wauer‘s race ended in the Clearways gravel trap on the first lap.