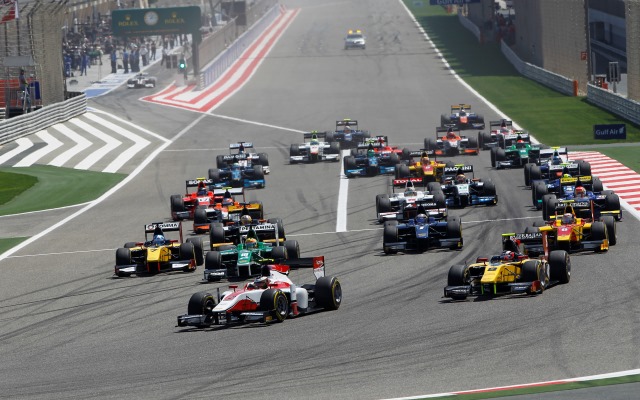 The first edition of a new, more concise, roundup for 2014 looks back an intriguing opening GP2 weekend in Bahrain, Formula Renault from Imola and Rockingham, and regional championships in South America.

Expected GP2 title contender Jolyon Palmer claimed an early points lead after the opening weekend in Bahrain. He made a bad start to Saturday’s race from pole position, but the Briton first salvaged third place before going on to win the sprint race after rising from seventh to first in just over a lap.

Stoffel Vandoorne was arguably the star of the weekend though, winning his debut race in the category in assured fashion, just as he had done in Formula Renault 3.5 12 months ago. Sunday did bring the Belgian ace back down to earth, as he lost ground at the start and then suffered contact.

With other pre-season favourites Alexander Rossi, Daniel Abt,?Felipe Nasr, Mitch Evans and Raffaele Marciello all struggling to varying degrees, two lesser-fancied drivers starred. Julian Leal took a second and a third to claim an unexpected second to Palmer in the standings, while Simon Trummer scored his first podium in anything since 2009 with second in race two after a remarkable recovery from beginning Saturday’s encounter from the pits having stalled at the start of the formation lap.

Despite Vandoorne’s achievement, it seems experience is still going to be a useful asset in GP2 this year. 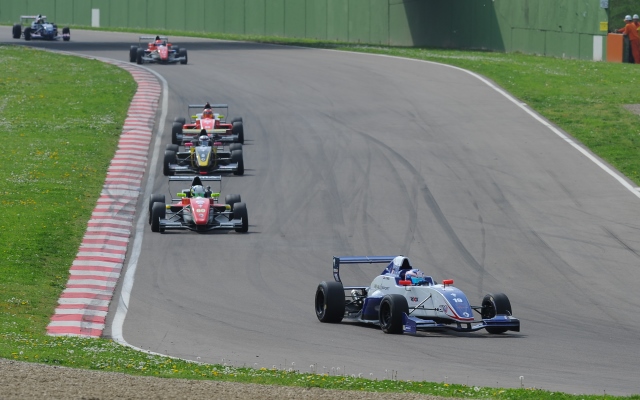 Nyck de Vries made a dominant start to a season of high expectations with a pair of untouchable drives in the Formula Renault 2.0 Alps opener at Imola. The McLaren junior, who is the favourite for both Alps and Eurocup glory in his third year in the category, claimed pole position by over two seconds on a drying track in qualifying, and was able to comfortably lead both races and claim maximum points.

2013 Alps title contender Bruno Bonifacio finished second to de Vries in both races, but with the Eurocup regular not registered for points, it is Simon Gachet who holds second place in the standings after a pair of third places. The Frenchman capitalised on errors ahead of him to make the podium in race one, and held second early in race two until falling back behind Bonifacio.

Jack Aitken bounced back from a practice shunt to finish both races in fourth but is another driver not eligible for points. As such, it is fellow Briton George Russell?who sits third in the standings after a strong debut weekend in single-seaters, finishing the races sixth and ninth but scoring points for third and fifth once the wildcards were discounted. Toyota Racing Series champion Andrew Tang, who joined Prema following Russell’s late switch to Koiranen, and Seb Morris are close behind. 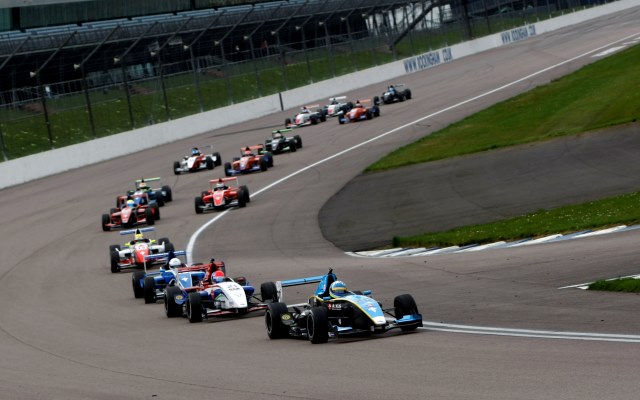 The opening weekend of Protyre Formula Renault at Rockingham saw three different winners from the three races. Matteo Ferrer claimed a triple pole in qualifying, and although he could only convert that into a win in race two, he leads the standings after the first round thanks to two other podium finishes.

Pietro Fittipaldi capitalised on an error from Ferrer to win race one, but lost ground during the two Sunday races and only finished them in fourth, leaving him third in the standings. Second to early leader is Ferrer is Piers Hickin, who was only seventh fastest in qualifying but put in three superb race performances to claim a second and two thirds.

Alex Gill was running second in race one until being robbed by a late puncture, but the Fortec karting graduate finished second to Ferrer in race two and then pass the MGR man to win race three. Team-mate Ben Barnicoat started and finished all three races in fifth as engine problems meant that the Racing Steps Foundation prospect struggled to repeat his form from his Autum Cup triumph at Rockingham last November on a one-off appearance ahead of his NEC campaign.

15-year-old Pedro Piquet kick-started the revamped F3 Brasil series and his own first full single-seater campaign with victories in both races at Taruma. Running a livery paying homage to his father Nelson Piquet, he claimed pole position in qualifying but stalled at the start of race one. However, he was able to work his way through the order and win by five seconds.

Piquet, whose participation in the Toyota Racing Series was cut short in January due to administrative issues, began race two from sixth but quickly hit the front and took victory with an eight-second margin.

Ex-Formula Abarth racer Lukas Moraes was the nearest man to Piquet in qualifying but retired from both races. 2013 Class B champion Bruno Etman?finished second in race one and fourth in race two to claim P2 in the standings ahead of double series runner-up Raphael Raucci, fifth and second in the two races. International karting graduate Vitor Baptista took two Class B wins with a fourth and a third overall.

F4 Sudamericana: Ortiz and Balbi win at opening round

Utilising the Signatech chassis and Fiat engines previously seen in the Formula Futuro series, F4 Sudamericana commenced in the city of Mercedes in Uruguay. Karting graduate Felipe Ortiz leads the standings after finishing third in race one and then winning race two. Fellow Brazilian Bruno Baptista is close behind after two second-places.

Home racer Frederick Balbi went from fourth on the grid to victory in race one, aided by pole-sitter Enzo Bortoletto and third-place starter Ortiz both stalling. Balbi could only manage sixth in race two, leaving him third in the standings. Bortoletto completed the race two podium behind Ortiz and Baptista.

The UK-based MSV F3 Cup has often been the reserve of older drivers and enthusiastic amateurs – along with the occasional superstar attempting to qualify for Macau – but 17-year-old newcomer Toby Sowery dominated the opening round of the 2014 season at Snetterton.

Driving a 2005-spec Dallara for BRDC F4 champions Lanan Racing, the karting graduate claimed pole by nearly a second and won race one by 17 seconds. A safety car restricted his winning margin to a mere five seconds in race two. He’s got a nine-point lead over series regular Tristan Cliffe.

Vandoorne, de Vries and Piquet may have stolen the headlines around the world, but we’ve chosen to shine a light on Alex Gill’s performances at Rockingham. A veteran of just five car races, the Fortec driver took one victory and a second-place, and deserved a another P2 but for a puncture. That leaves him some catching up to do in the standings, but the former British junior karting champion has shown he will be a strong force this year with these performances against more experienced competition. 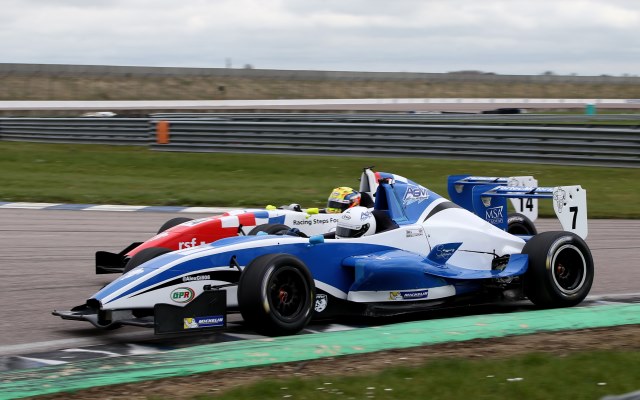