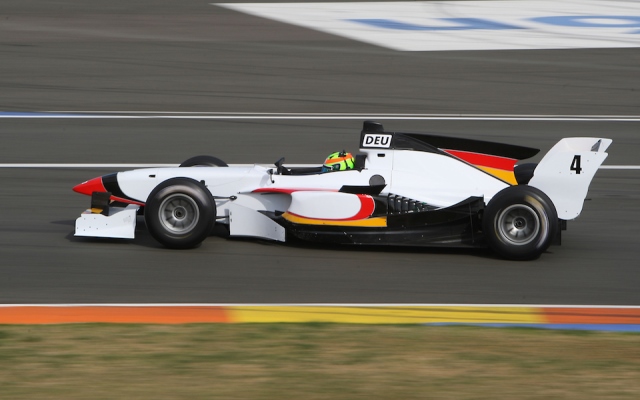 The category utilises the first-generation A1 Grand Prix cars, and Balthasar will drive the Team Germany car run by the GU Racing operation.

GU Racing previously competed in the Superleague Formula series, taking another German protege Max Wissel from Formula BMW into the series, where he finished third in 2009 and 2010.

“The sound and driving behaviour of FA1 are the most spectacular thing I’ve ever seen and in combination with the other racing series, as well as music and family events, the events are sure to be a treat for all festival lovers,” said Balthasar, who has driven the Germany car during recent tests in Valencia.

“I am very proud to be able to exclusively represent Germany in the championship and can hardly wait for the season opener in late April in Portugal now. I hope that we can take our performance from the tests to the first race and then start the season up front.”

Balthasar is the first driver to confirm their participation in FA1. Tom Dillmann, Nigel Melker and Felix Rosenqvist have all taken part in testing, with the first round scheduled for 26-27 April at Portimao.

By going from German F3 to competing for Germany in the ex-A1GP Lola-Zytek, Balthasar will follow in the footsteps of Nico Hulkenberg.

The current Formula 1 ace burst onto the scene racing for Team Germany in A1 Grand Prix in 2006-07. He came in as a relative unknown after finishing fifth in German F3 during 2006, but went on to dominate the A1GP season.