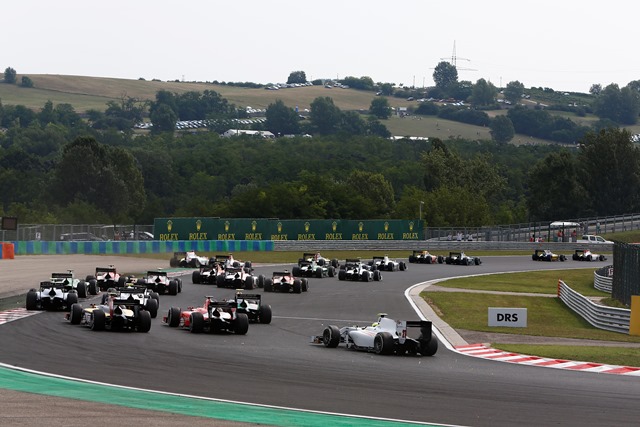 Jolyon Palmer completed a fine turnaround in the two GP2 races at the Hungaroring, twice passing Felipe Nasr to extend his championship lead. Nasr had claimed his first ever GP2 pole in qualifying and claimed four points for doing so, while Palmer qualified off the front row for the first time all season, starting down in sixth. While Nasr led the early stages of the feature race, he later lacked pace and found himself defending from Palmer before they both pitted late on. An early safety car had rendered both their strategies useless, but Palmer fought through to fourth with Nasr sixth.

Nasr held second early in the sprint race while Palmer had to fight his way up to third after an unspectacular start, but the Briton was able to put a move on Nasr that – despite the Brazilian’s protestations during and after the race – was deemed to be fair and therefore finish second. Palmer thus extended his lead from 41 to 43 points – an impressive feat after the way his weekend started.

Arthur Pic capitalised on the safety car in the feature race to score his maiden win, making his early stop to change from options tyres to primes and being able to catch and stay with the leading train. Adrian Quaife-Hobbs and Takuya Izawa completed an unlikely podium from 22nd and 26th on the grid.

In the sprint race, Stoffel Vandoorne grabbed his first win since his debut victory in Bahrain, managing to pull away from Palmer and Nasr and setting the fastest lap on the final tour. The result moved the McLaren junior up from sixth to third in the standings ahead of Johnny Cecotto, Stefano Coletti and Mitch Evans who all failed to score in Hungary. 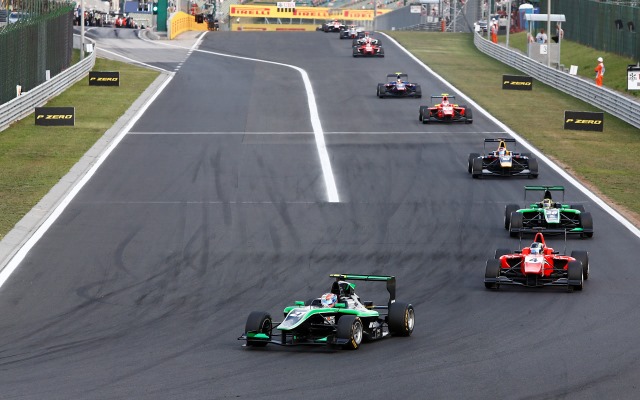 Richie Stanaway scored his second win of the GP3 season in race one at the Hungaroring to become Alex Lynn‘s closest rival in the title race. After winning the first race from pole, Stanaway made up two places in race two to finish sixth. Lynn, meanwhile, lost two places at the start of race one to drop from second to fourth, but was able to repeat that end result on Sunday. His championship lead has increased from 40 to 41 points.

The Arden team enjoyed an improved performance, with Robert Visoiu and Patric Niederhauser featuring at the sharp end for the first time. A fast-starting Visoiu pushed Stanaway for the win but made an error when he attempted to move for the lead at the chicane and went off, dropping to third. The Romanian finished fifth in race two. Niederhauser meanwhile was sixth in race one and then made a quick start of his own to win race two – his first victory for more than two years.

Nick Yelloly completed a Status 1-2 in race one, while Dino Zamparelli and Jann Mardenborough made their second successive race two podiums. Jimmy Eriksson claimed a single point from his weekend and is now tied for third in the standings with Emil Bernstorff, who was fifth and seventh. Marvin Kirchhofer couldn’t score points after starting his weekend with a grid penalty. 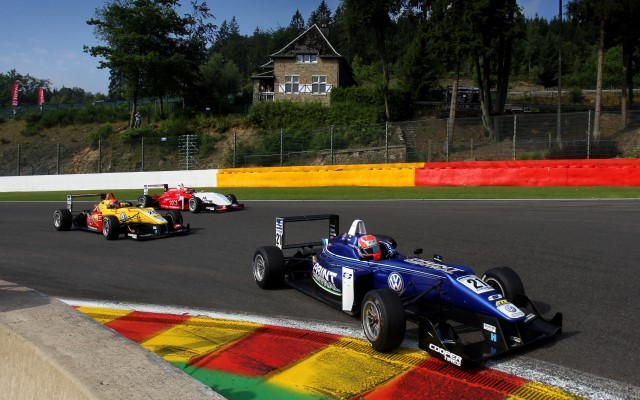 Ed Jones returned from an 11-week lay-off for a back injury by winning all three British F3 races at Spa-Francorchamps as the field size increased from five to 14 for the trip to Belgium. Jones and Carlin team-mate Sean Gelael raced their FIA-spec cars, and did not register for points. While Jones won all three races – including coming from fifth on the grid in race two – Gelael scored two seconds and a third.

From those eligible for points, FR3.5 ace Roberto Merhi took two ‘wins’ on his return to F3 with Double R, finishing third overall in race one and second in race two, only being overhauled by Jones on the last lap. A fuel pump problem prevented him from starting race three, enabling Performance Racing returnee John Bryant-Meisner to finish third and claim full points after two fourths earlier in the weekend.

In the title race, Matt Rao jumped from third to first with an eighth, a sixth and a fourth from the three races. Rivals Martin Cao and Sam MacLeod both retired from one of the races after incidents. The top three are separated by just eight points, but MacLeod (who switched from Fortec to Carlin for this event) is set to miss two of the remaining three rounds due to German series commitments. 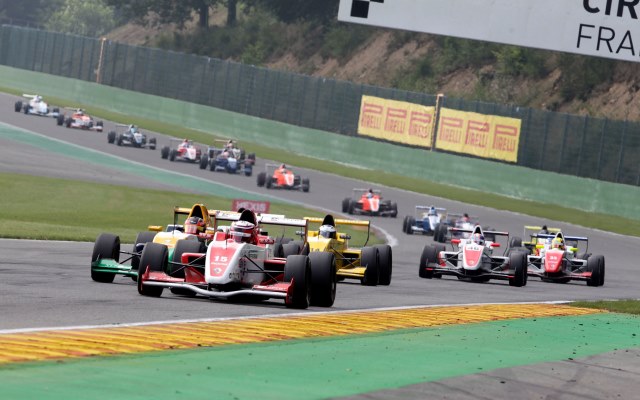 Kevin Jorg claimed his second and third wins from four starts in this year’s Formula Renault 2.0 NEC at the Spa-Francorchamps, but had his race two victory taken away for a jump start. The Swiss driver had led both races from pole position, but a post-race penalty relegated him to 20th in the results for the second encounter.

That played into the hands of Steijn Schothorst by allowing the Dutchman to score his first win of the campaign – the seventh winner in eight races – and extend his championship lead. With Schothorst fourth in the opening race, a P2 finish for Ben Barnicoat allowed the Racing Steps Foundation-backed rookie to take the championship lead, but his fifth place in race two leaves him 13 points in arrears.

Louis Deletraz is just a further five points back after a double podium finish – third in race one and second in race two. Ukyo Sasahara and Gustav Malja moved up to fourth and fifth in the standings – the Japanese driver scoring a seventh and a fourth and the Swede taking a sixth and a third. 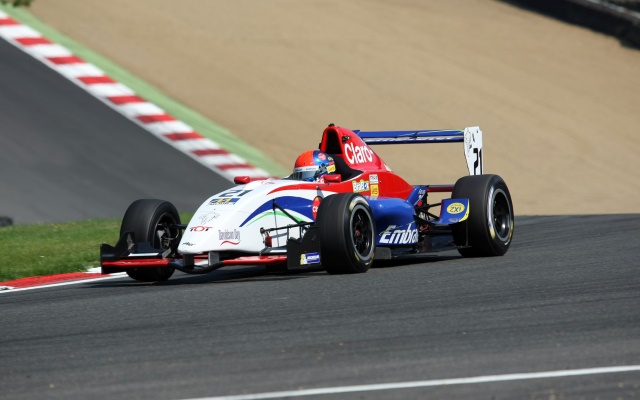 Pietro Fittipaldi scored his fourth and fifth consecutive wins in Protyre Formula Renault at Brands Hatch, making it six wins from eight races so far this season for the Brazilian. In race one he grabbed the lead on the opening lap, while he led race two from pole position to chequered flag.

Matteo Ferrer finished second in each race, meaning that Fittpaldi could only extend his championship lead from 25 to 36 points as Ferrer moved into P2. Alex Gill completed the podium in race one, and finished fourth in race two. Piers Hickin lost ground in the title race by crashing out on the first lap of race one, but he saved his weekend by beating Gill to third in race two.

F3 Brazil: Piquet back in front at Curitiba 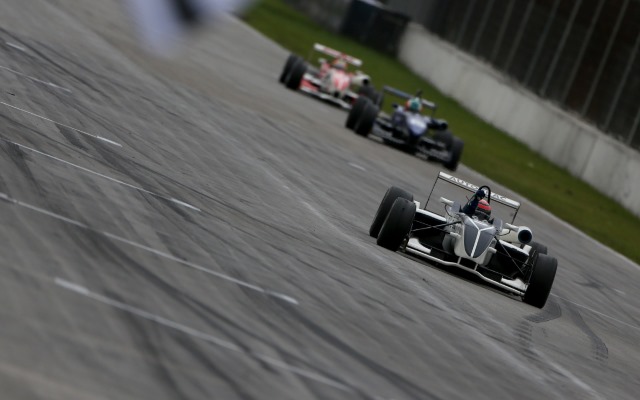 Pedro Piquet returned to winning ways in F3 Brazil at Curitiba, with the now-16-year-old victorious in both races. He led the first race from pole position, and went from sixth to first inside the first three laps.

Second to Piquet on both occasions was B class leader Vitor Baptista, twice within three seconds of the winner. Another B class driver Matheus Leist finished third in both races.

Piquet’s nearest rival Bruno Etman was a retirement in race one and finished seventh in race two, leaving him 60 points adrift of Piquet and seven ahead of Lukas Moraes – fifth and sixth in the two races.

As at Rockingham and Donington before, Fittipaldi is still not the quickest qualifier in Protyre Formula Renault but he is currently unstoppable in the races. With his rivals scoring consistently, he will need to keep up this kind of form to stay safely out front. 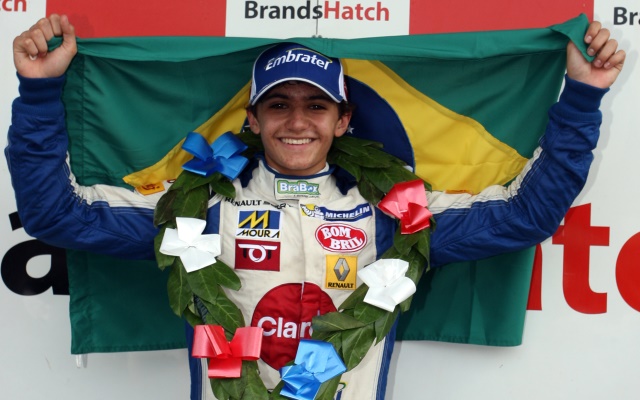