Home Featured Our 12 drivers to watch in 2012
Features

It’s a new year, which means it’s time for us to have a look at who we think will shine this coming season… 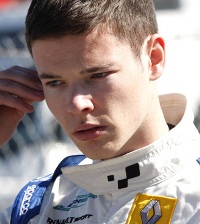 A late start in motorsport has left Dan playing catch up, but he enjoyed a solid first full season in cars in Formula Renault UK in 2011. He then had a highly successful winter series, where he ended up vice-champion to the highly-rated Oliver Rowland with podium finishes from half of the six races.

With Rowland heading off to the Eurocup this year, Dan begins 2012 as the pre-season favourite for the British championship, ahead of his sophomore campaign in the category. He can’t win the title if he isn’t on the grid though, and he is still searching for the necessary funds. You can support him at gofundme.com/danwellsracing. 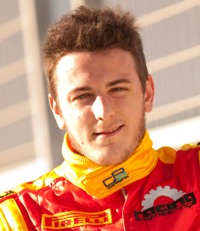 Fabio hasn’t shown anything particularly special in his first two seasons of GP2 since winning the Formula Master title, with just a single Barcelona sprint race win from each campaign – despite replacing outgoing champion Pastor Maldonado at Rapax for 2011. But a switch to Racing Engineering for post-season testing seem inspired – the Swiss driver regularly topping the timesheets whenever he was in the car. He then took pole position and feature race victory in the GP2 Final at Abu Dhabi in November.

He’s shown on occasions that he can have the pace – but 2012 is the year that he must demonstrate this regularly and challenge for the title. If he can, an F1 seat may well await him after a strong debut test with Sauber in Abu Dhabi.

Click here to see our Driver Profile of Fabio from November 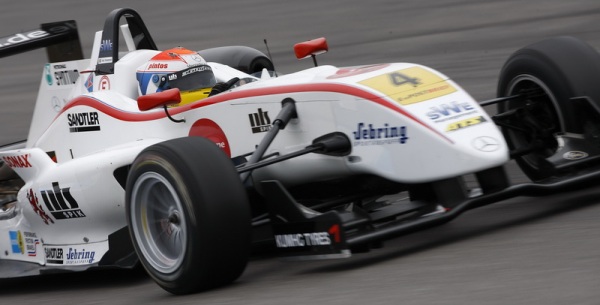 Rosenqvist has re-signed with Mucke for 2012. Photo: f3euroseries.com 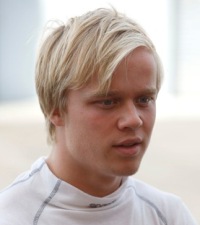 Felix racked up some early podiums after stepping up from German F3 to the Euro Series at the start of 2011, but shot to prominence with a mature victory at the prestigous Masters of F3 at Zandvoort in August. He was a match for champion Roberto Merhi at the Hockenheim season finale, and finally clinched a maiden Euro Series victory.

With Felix currently seeming like the only one of the top seven (at least) drivers from 2011 who will continue in the series into 2012, he begins the year as the favourite. His pace at both Zandvoort and Hockenheim second-time-around this year bodes well for his sophomore campaign, though his Mucke team are yet to win a Euro Series title.

Abt lit up the timesheets during post-season testing. Photo: GP3 Media Service 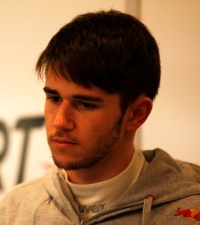 Daniel will have been disappointed with the way his 2011 campaign panned out in the Euro Series – particularly after leading the Macau Grand Prix on his debut at the end of the previous year. He joined up with the all-conquering ART squad for GP3 post-season testing, and was quickest on both days at Valencia and the second day at Jerez.

It’s not yet clear whether he will race in GP3 – to do so he’ll have to break free of personal backer Volkswagen and their F3 programme (his family run a successful tuning company for?Volkswagen Group brands – as well as Audi’s DTM team). But the fact that he drove for ART on all six days of GP3 testing is telling. Nicolas Todt’s outfit have won the drivers’ and teams’ titles in both years of GP3 so far. If? he does remain in F3, he’ll no doubt be amongst the contenders there too.

Kvyat was already a frontrunner in Formula Renault in 2011. Photo: World Series by Renault/DPPI 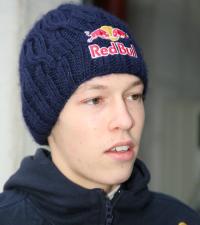 Daniil couldn’t quite match Red Bull Junior teammate Carlos Sainz Jr in their first season of Formula Renault in 2011 after both graduating from Formula BMW – and for that reason he’ll be spending another year in the category while Sainz moves on up to Formula 3.

He’s certainly shown potential though – most recently being amongst the pacesetters in a Formula Renault 3.5 test as well as scoring a triple victory in the NEC finale at Monza. The pressure will be on next year to convert his pre-season favourite status into the title, and he’ll have the likes of Rowland and Vandoorne pushing him in what is already shaping up to be a competitve year in the junior category. But with nine Formula Renault wins under his belt already it’s hard to bet against him adding to that this year.

Korjus will remain in FR3.5 after an impressive rookie season. Photo: World Series by Renault/DPPI 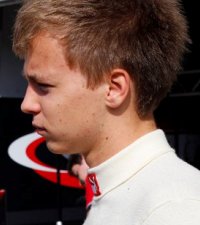 Kevin was a revelation during early 2011, winning three of the first nine races after making the big leap up from Formula Renault 2.0. Four retirements however from the opening six races left him a little out of touch with the championship leader, and he dropped back to sixth in the standings after failing to finish in the top five in any of the last eight races.

He did enough to impress the bosses at Lotus Renault and secured a day of testing at Abu Dhabi, but with time on his side he will remain in FR3.5 this year for a go at the title. He didn’t set the pace in post-season testing – but then he didn’t need to. After showing his pace on numerous occasions last year he just needs to find some consistency.

Ericsson remains with iSport for an assault on the GP2 title. Photo: GP2 Media Service 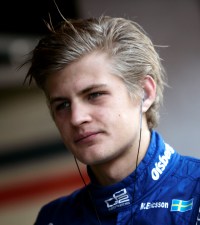 Marcus’ 2011 campaign was a bit of a disappointment, failing to win a race and stepping on the podium just twice during the main season. He would probably have won the Hungary feature race though, had he not been unsafely released by his team.

He sticks with iSport for this year, and the signs are good. With few, if any, of those who finished ahead of him in the points last year returning in 2012, the Swede will begin amongst the favourites. He set the pace on the one day of post-season testing that he contested, and he was quick during the non-championship Abu Dhabi races after getting over a poor qualifying. His single-lap pace will certainly need improving, in fact. His record in the lower categories is very good, and 2012 should be the year it all comes together for him.

Sainz showed his pace on a guest appearance at the F3 Euro Series finale. Photo: f3euroseries.com 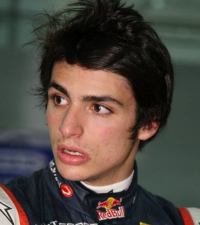 Carlos has enjoyed a stunning start to his single-seater career, finishing fourth overall and top rookie in Formula BMW in 2010 and then winning the Formula Renault NEC title together with finishing runner-up in the Eurocup in 2011.

This year he steps up to British Formula 3, following in the footsteps of fellow Red Jaime Alguersuari, Daniel Ricciardo and Jean-Eric Vergne – who all wentwon the title at the first attempt. If Carlos does win the title he will break Alguersuari’s record for being the youngest champion in the series. He contested the F3 Euro Series finale at Hockenheim, and qualified third.

Click here to see our Driver Profile of? Carlos from last August 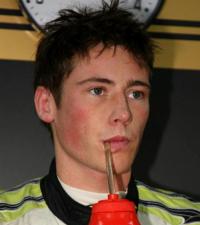 Richie ran away with the German F3 title in his first year in the category, but it was difficult to see whether this was down to his talent or just a lack of competition in the series. He quickly proved his talent though when he joined the GP3 Series at Spa, winning the Sunday race.

As a result it looked like Richie would be heading to GP3 for this season – until he tested in Formula Renault 3.5. He was quickest on both of the first two days of the Aragon test – and was on the pace on the third as well. As a result he’s looking at making the jump to the series and with his Gravity management co-owning a team it looks fairly certain. It’ll be a big jump for him – but then he’s a big talent. 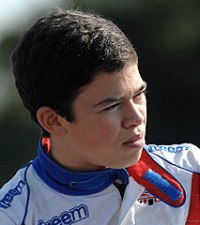 On McLaren’s driver development programme and managed by Anthony Hamilton, Nyck successfully defended his World Karting Championship crown last year. 17 next month, the time has come for him to move on up to car racing and Formula Renault.

It’s not clear which team he will turn out for just yet, but he has tested for Eurocup frontrunning teams Josef Kaufmann (who took fellow Dutchman Robin Frijns to the title last year), Koiranen and R-ace GP (who are affiliated to the ART squad with whom Hamilton Jr rose through the ranks). He has already been threatening the regulars at the top of the timesheets in testing and looks like he certainly could be a frontrunner, if not title contender, during his rookie campaign. He’ll definitely be exciting to keep an eye on. 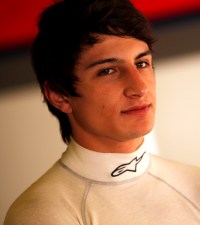 Mitch caused a shock when, in just his second European race meeting, he took pole position and victory at the Barcelona round of the GP3 season. He was soon leading the championship race, but just as some of his more experienced rivals seemed to get the hang of the GP3 car Mitch’s luck began to run out.

With a year now under his belt and his main rivals all set to move on for 2012, Mitch begins the year as the clear title favourite – and demonstrated that by topping every session in the only post-season test he contested at Barcelona. He’ll be sticking with mentor Mark Webber’s MW Arden squad, so he’ll have to bring ART’s unbeaten streak in GP3 to an end to come away with the silverware.

Gutierrez begins his second GP2 season as one of the favourites. Photo: GP2 Media Service 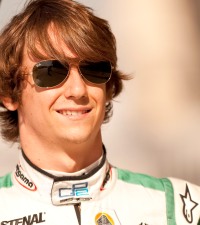 After his dominant GP3 campaign in 2010, Esteban would have been forgiven for expecting more from his maiden GP2 season. The latest generation of car and tyres have made things considerably more difficult for rookies though. Regardless of that he will certainly want to win the title in his second year, and he does probably begin as the favourite.

He was quickest in practice for the Abu Dhabi Final, but had a poor qualifying result after his car came to a stop – and was taken out at the start of the feature race. Pre-season testing will tell us whether or not he is the pick of the bunch. With titles in 2008 and 2010, it’s certainly time for him to add another in 2012.

PaddockScout’s coverage of the 2012 season kicks-off with the opener of New Zealand’s Toyota Racing Series from Teratonga on the 14-15 Jaunary, featuring a number of top international talents.

Four newcomers in the Red Bull Junior Team in 2012