Let’s start at the top of the feeder series ladder with GP2, where Romain Grosjean succeeded in winning the title to earn himself a return to Formula 1. He certainly didn’t have it all his own way early on, where he, Giedo van der Garde, Charles Pic, Sam Bird and Davide Valsecchi were all separated by just two points after three race weekends. Grosjean soon found another gear though to ease to the title. His early rivals all faltered one way or another before the end of the year, and it was Italian veteran Luca Filippi who would snatch the runner-up spot having claimed three wins since an enforced mid-season change of teams.

Another man with a stronger second half to the year was Jules Bianchi. The Ferrari reserve had been expected to challenge Grosjean pre-season, but endured a terrible first four weekends where he accumalated just eight points. A pole and win at Silverstone was the start of a run of consecutive points finishes that continued until the very end of the year as he recovered to third overall. He pipped Pic, who demonstrated sufficient talent to earn himself an F1 drive for 2012.

Onto GP2’s own little feeder series, GP3, which enjoyed a highly competitive mixture of F3 race-winners, continuing GP3 racers and exciting rookies for its second campaign. The first ten of the 16 races saw ten different winners. Nigel Melker won the season opener in Turkey and subsequently held the points lead through the opening couple of race weekends. Kiwi teenager Mitch Evans won at Barcelona and went onto take the standings lead next time out in Valencia, while a top weekend for Alexander Sims on home soil at Silverstone then put him to the top of the points table.

Pre-season favourite Valtteri Bottas had a very slow start to the year, but took the points lead from Sims in the middle of a run of five straight podiums that contained three wins. His fourth and final win at Monza sealed him the title with a race to spare having put himself out of the reach of his consistent ART teammate James Calado. Melker ended up third ahead of strong finisher Nico Muller, Adrian Quaife-Hobbs and Sims, who non-scored from the final three weekends. Rio Haryanto was a double winner in changeable weather conditions while Lewis Williamson was by far the best newcomer at GP3/F3 level and won on British GP morning at Silverstone. 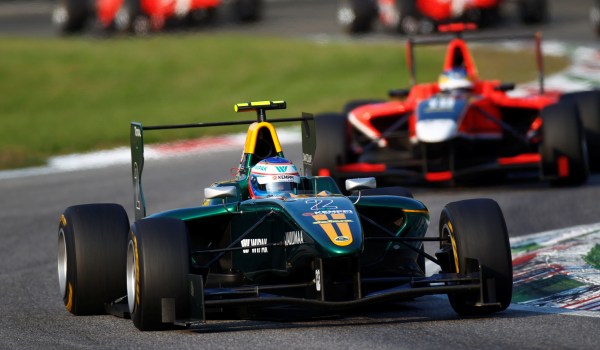 Formula Renault 3.5 emerged as a greater rival to GP2 than ever in 2011, thanks mainly to a titanic title battle between Carlin teammates Robert Wickens and Jean-Eric Vergne. It would be the Canadian who would come out on top of that battle, but it will be the Frenchman who will be on the F1 grid in 2012 thanks to Red Bull. A lack of personal sponsorship for Wickens meant that he missed out on the vacancy at Marussia to Pic.

Alexander Rossi had an impressive rookie season and ended up third overall, while Albert Costa had another strong campaign in fourth. Daniel Ricciardo ended up fifth after his curtailed season alongside his F1 chance, while 18-year-old Estonian Kevin Korjus won three races in the first half of the year to be up there with Wickens and Vergne before his season tailed off.

There was another high-powered single-seater series that seemed to step up another level this year in the form of Auto GP. Italian teenager Kevin Ceccon shone after coming out of the European F3 Open, and ended the year as champion. He did benefit however from his three nearest rivals having all missed one weekend each. Filippi’s mid-season GP2 revival resulted in him missing the Oschersleben rounds, while visa problems for the Donington round denied three-time race winner Sergey Afanasiev and Adrien Tambay was left without a drive for that same round after being dropped by the Gravity Sports Management firm before making a return with Campos.

Mentions also go to Haryanto who dovetailed an Auto GP campaign alongside GP3 and won at Valencia and to Formula Renault graduate Giovanni Venturini who stunned the field with pole and victory in the season opener at Monza and later won again at Oschersleben – but lacked consistent season-long pace. 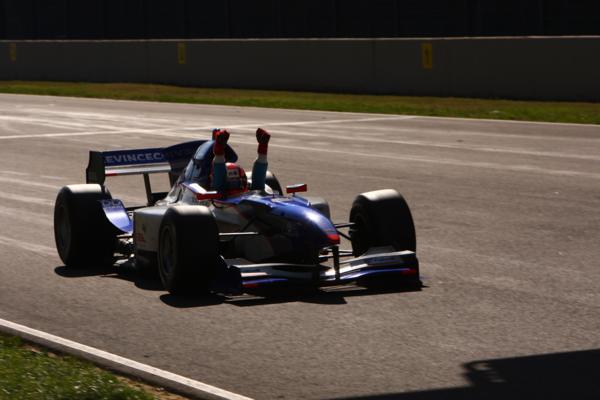 Ceccon was the man celebrating come the end of the Auto GP season. Photo: Auto GP

In FIA Formula Two it was all about Mirko Bortolotti, who returned to the series from an unsuccessful stint in GP3 and became a dominant champion – never finishing outside the top six and only twice off the podium. He was helped however by his two nearest rivals both having seasons of two halves.

Christopher Zanella was a surprise double winner at the second round at Magny-Cours, but failed to find the podium at all in the second half the year. The Swiss driver did manage to hold onto the runner-up spot though, despite a late surge from Spain’s Ramon Pineiro, who scored three consecutive race wins in the second half of the season as he recovered from a less than satisfactory start.

There was another dominant champion in the Formula 3 Euro Series, where Roberto Merhi was pretty much unchallenged on his way to the title. Marco Wittmann had a disappointing season, but still ended up as runner-up after edging out Merhi’s Prema teammate and fellow Spaniard Daniel Juncadella. Melker finished fourth, picking up four race wins alongside his GP3 campaign.

Sweden’s Felix Rosenqvist took a surprise win in the Masters of F3 at Zandvoort after Merhi and Juncadella collided at the start. Meanwhile, it was Juncadella who came out on top to win the Macau Grand Prix. Merhi picked up more silverware in the form of the new FIA Formula 3 International Trophy, though Wittmann won the Pau Grand Prix on its return as an F3 race.

Rosenqvist on his way to victory in the Masters of F3. Photo: f3euroseries.com

In British F3, Felipe Nasr won the title at a canter, with Carlin teammate Kevin Magnussen finishing up as runner-up ahead of consistent Colombian Carlos Huertas. Sticking in Britain, Alex Lynn ran away with the Formula Renault UK title, though rookie Oliver Rowland came on strong towards the end of the year to pip Tio Ellinas to the runner-up spot. Rowland then went onto win the six-race Finals Series at the end of the year in dominant fashion. Dino Zamparelli defeated Josh Webster to win the Formula Renault BARC series, while Racing Steps-backed karting graduate Jake Dennis won the new Intersteps series based upon Formula BMW cars. Scott Malvern enjoyed an emphatic year in Formula Ford, winning the British title with a campaign that included a run of 13 consecutive victories – as well as sweeping the revived EuroCup.

Italian F3 saw no fewer than six drivers in contention for the title, with third-year driver Sergio Campana coming out on top ahead of American FBMW graduate Michael Lewis – both getting a Ferrari F1 test as prizes. Ferrari Driver Academy members Raffaele Marciello and Brandon Maisano also impressed an finished up third and fourth ahead of Edoardo Liberati and Maxime Jousse. In Formula Abarth, Russian teenager Sergey Sirotkin flew to the European title ahead of Swiss drivers Patric Niederhauser and Michael Heche. In the Italian series, second year driver Niederhauser was champion ahead of Sirotkin and Heche. 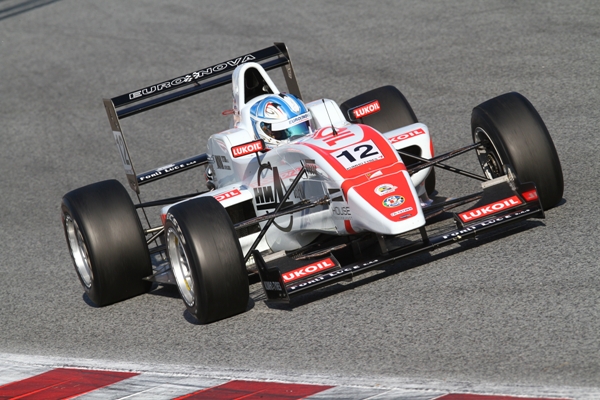 Onto Germany, where Kiwi rising star Richie Stanaway won 13 of the 18 races on his way to the title in his first year in the category. Denmark’s Marco Sorensen was his nearest challenger, with Klaus Bachler finishing third. In the supporting ADAC Formel Masters – won by Stanaway in 2010 – it was Germany’s Pascal Wehrlein who became champion ahead of compatriot Sven Muller and Britain’s Emil Bernstorff.

In the Spanish-based European F3 Open, Swiss-Greek Alex Fontana won the title, despite winning just one of the 16 races. Italy’s David Fumanelli won half of the last eight races – but was too far behind to challenge Fontana after a poor start to the season.

Onto Formula Renault – and the Eurocup. After his Formula BMW Europe triumph last year, Robin Frijns was superb on his way to another title glory, overcoming fellow FBMW graduate Carlos Sainz Jr who was the (young) man to beat in th early rounds. Sainz was victorious in the North European Cup, denying fellow Red Bull Junior Daniil Kvyat. And in the new ALPS series created by the merger of the Swiss and Italian championships, Spain’s Javier Tarancon came out on top against the French duo Yann Zimmer and Paul-Loup Chatin.

BMW began a new Formula BMW programme for 2011, called the Talent Cup. The year was dominated by Stefan Wackerbauer – with the German winning the decisive grand final held at Oschersleben in October. As well as winning a paid drive in the German F3 Cup, Wackerbauer also gained support from Red Bull – immediately creating comparisons with Sebastian Vettel.

Moving onto Asia, where the old Formula BMW Pacific championship had become the JK Racing Asia Series for 2011. The season saw an epic battle for the title between Austrian karting graduate Lucas Auer and Malaysian Afiq Ikhwan Yazid. Between them, the pair won 17 of the 18 races, and despite Yazid taking ten wins to Auer’s seven it was Auer (the nephew of Gerhard Berger) who accumalted more points over the season to claim the title.

A new series was introduced in China this year, based upon Formula Abarth and run under the name Formula Pilota. Swiss-French teen Matheo Tuscher won the title ahead of Angola’s Luis Sa Silva.

In Japan, Yuhi Sekiguchi won the F3 title before impressing on his way to finishing fourth at the Macau Grand Prix after a late call-up to the Mucke Motorsport team.

In South America, Fabiano Machado was unchallenged on his way to the Formula Three title, while the Formula 3 Brazil Open held at Interlagos in January was won by British series runner Lucas Foresti. The Formula Futuro Fiat title was won by rising star Guilherme Silva – who also won South American F3 races.

Mitch Evans won the Toyota Racing Series in his native New Zealand prior to competing in GP3 ahead of fellow Kiwi youngsters Nick Cassidy and Jamie McNee.

A huge thanks to all that have supported PaddockScout through our early days in 2011. We’ll be back for more in 2012 – beginning with our 12 drivers to watch for 2012 feature, before a return to racing with coverage of the Toyota Racing Series from New Zealand from 12-15 January.