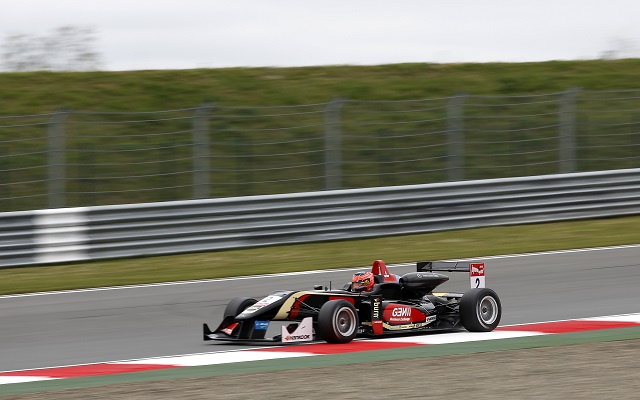 FIA F3 European Championship standings leader Esteban Ocon locked out poles for the second and third race of the Moscow Raceway round.

The Frenchman, who previously converted his race one pole into a confident victory, was once again in a league of his own in the second qualifying session.

Ocon set his overall best lap time of the session with eight minutes to go, clocking in a 1:27.65. None of the drivers, including himself, would be able to come close to that benchmark in the remaining time, with second-placed Antonio Fuoco three tenths adrift, completing a Prema 1-2.

Carlin’s Tom Blomqvist equalled the time set by Fuoco to pick up third on the grid for race two. The Brit will start the second-best lap based race three from the front row.

Max Verstappen will start both remaining races of the round from row two. The Dutchman, who currently sits second in the standings, was fourth quickest overall and beat Fuoco to third place on second-best laps.

Mucke’s Lucas Auer and Carlin’s Jordan King will start race two from the third row, ahead of RSF-backed Jake Dennis and Prema Powerteam’s Dennis van de Laar. Felix Rosenqvist will line up in ninth, with Nicholas Latifi making it four Prema drivers in the top ten.

King and Dennis will make it an all-Carlin row three in race three, with the top ten completed by Auer, van de Laar, Gustavo Menezes and Rosenqvist.