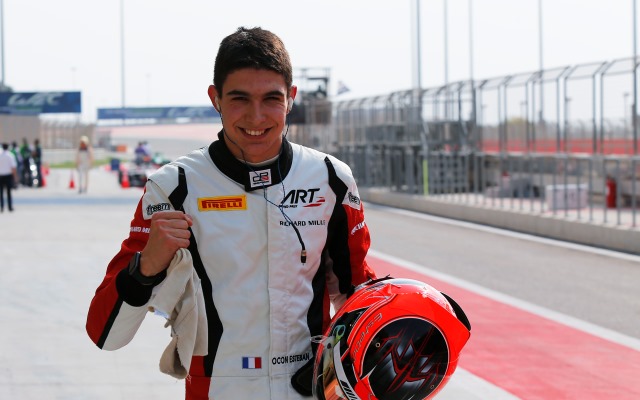 Esteban Ocon claimed bonus points that will move him of ahead of rival Luca Ghiotto in the GP3 title race by beating him to pole by half a second at the penultimate round at Bahrain.

Ghiotto, who triumphed in qualifying at five of the first six rounds, put himself onto provisional pole early in the session and remained there until there were around five minutes remaining.

Alex Palou then went the best part of half a second quicker, and Marvin Kirchhofer fell 0.041s short of matching the Spaniard’s time.

Kirchhofer’s ART team-mate Ocon had no such problems however, going 0.534s quicker than Palou.

Ghiotto was able to improve and take second ahead of fellow Italian Kevin Ceccon, but both were still more than half a second down on Ocon.

The Frenchman receives four bonus points for pole position that will overturn the two-point deficit he had to Ghiotto coming into the weekend.

The points will not be applied until after the first race though, and Ocon will hope to avoid a repeat of Sochi when he had pole but was passed by Ghiotto on the opening lap despite the Italian starting from sixth.

That contributed to Ocon now being on a remarkable streak of nine consecutive second-place finishes.

Behind the closely-matched Ghiotto, Ceccon, Palou and Kirchhofer, sixth place went to Artur Janosz ahead of title contender Emil Bernstorff – in a minority of drivers with track experience on GP3’s first visit to Bahrain having won six races there in Formula Middle East at the start of 2013.

Carlin’s Jann Mardenborough and Antonio Fuoco made the top 10, either side of Koiranen’s Jimmy Eriksson.

Koiranen debutant Matevos Isaakyan triggered a red flag when his car stopped 10 minutes in and wound up 21st of the 24 drivers with a laptime that had been good enough to briefly top the times early on.