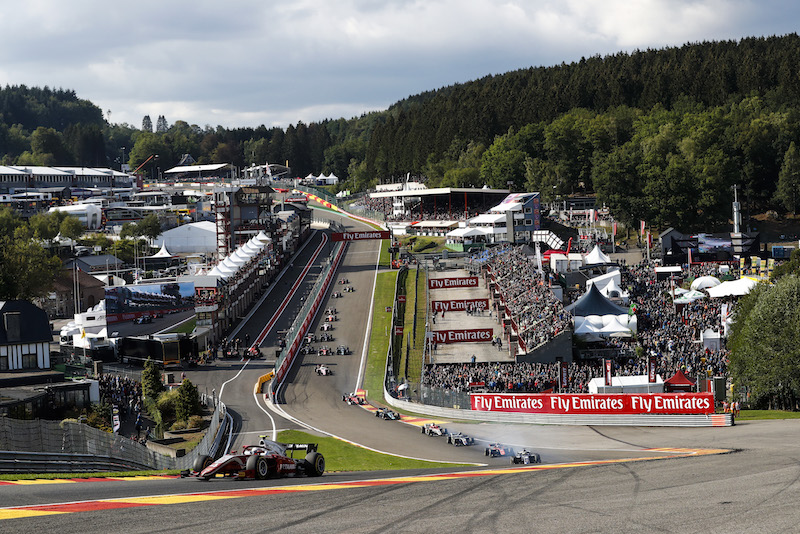 Nyck de Vries claimed his second Formula 2 feature race win in a row at Spa-Francorchamps with a controlled drive from pole position.

Prema driver de Vries made a strong getaway at the start, as championship leader George Russell got considerable wheelspin off the line and conceded second place to Sergio Sette Camara.

De Vries opened up a lead of seven seconds in the first nine laps before Sette Camara pitted. When de Vries swapped soft tyres for mediums a lap later, he rejoined in among the slowest of the medium-starters and his virtual lead was slashed to just 1.6s.

A safety car on lap 15 of 25 then almost eradicated his advantage entirely, but after controlling the restart with seven laps to go, de Vries went on to win by 3.1s over Sette Camara, to the delight of the many Dutch fans in the crowd.

Russell was challenged by his championship rival Lando Norris into Les Combes at the restart, but he stayed ahead to secure third and increase his points lead to 15.

Norris came under attack late on from Alex Albon, who attempted to pass on the outside of Les Combes on the final lap but ran wide.

The pair had gone three-wide with Luca Ghiotto at the same point on the first lap of the race, with Norris managing to stay ahead by braking late on the inside line.

Albon eventually fell to the bottom of the top 10 over a difficult first stint, but he was much stronger on the medium tyres, passing Luca Ghiotto with four laps to go.

Ghiotto immediately came under attack from Artem Markelov, who led part of the race after starting on the medium tyres and pitted for the softs just before the safety car was deployed.

A strong defence from Ghiotto meant that Markelov looked like he would have to settle for seventh until he got stronger drive out of the very last corner and – with nearly all four wheels off the track – beat the Campos car to the line by just 0.03 seconds.

On the same strategy as Markelov, Nicholas Latifi took eighth place and reversed-grid pole for race two. Maximilian Gunther and Roy Nissany completed the top 10, with Jack Aitken making his way up to 11th on fresh rubber after pitting for a second time under the safety car.