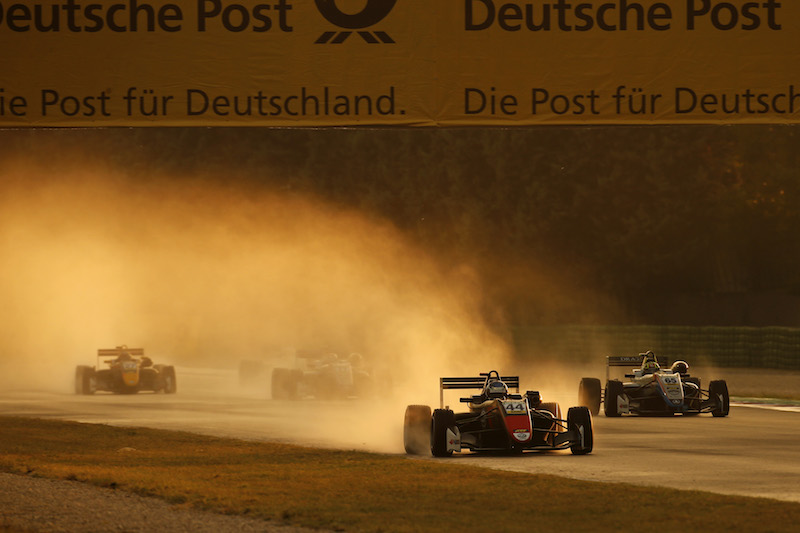 Juri Vips and Marcus Armstrong shared the spoils in an epic battle between the two?Formula 3 European Championship rookies in the second qualifying session at a stormy Misano.

The session began eight minutes late to allow the worst of the thunder and lightning to pass the circuit, with the track’s floodlighting shedding at least some light onto the track with sunset less than an hour away.

Vips appeared to be dominant in the difficult conditions until his former Formula 4 rival Armstrong pipped his benchmark time by just 0.009 seconds with five minutes left on the clock.

Prema driver Armstrong then took hold of the session, moving an entire second clear of Motopark man Vips with two minutes to go before finding a further improvement just before the chequered flag.

Armstrong could not improve with his final attempt, but his 1m46.214s was the fastest second-best time and therefore enough to give him pole for race three.

Race one winner Mick Schumacher was one of the closest drivers to Vips and Armstrong throughout and took third with his final attempt, a tenth behind Armstrong but three-and-a-half tenths in front of another Prema driver Ralf Aron.

Aron will start race three from the front row, splitting Armstrong and Vips, having recorded two laps that were just 0.02s apart.

Ferdinand Habsburg put his poor run of form behind him to have a strong session and will start both races from fifth for Carlin.

Surprisingly, championship leader Dan Ticktum was never on the same level as team-mate Vips during the session and had to make do with ninth.

Ahmed will move up to sixth however for race three, behind Zhou and Habsburg and ahead of Ticktum, Schumacher, Daruvala and Palou.