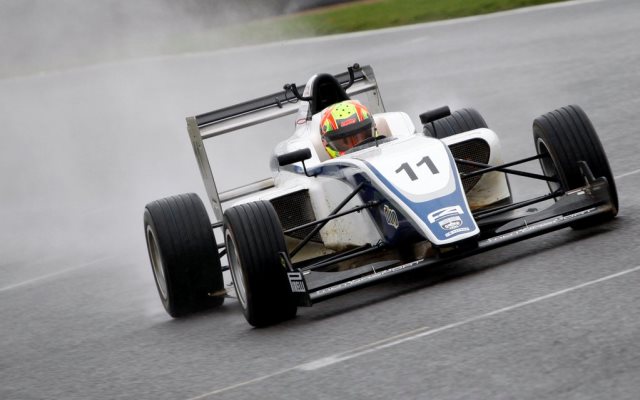 Lando Norris claimed victory on his BRDC Formula 4 debut as the second leg of the Autumn Trophy got underway at Brands Hatch after standings leader Harrison Scott crashed out of first place.

MSA Formula champion Norris only drove the car for the first time on Friday as he turned 16, but claimed pole position in a wet qualifying session by over eight tenths of a second from Scott.

With the cars still on wet tyres for the race, Scott got a better getaway than Norris to move into the lead.

He had built a two-second advantage by the start of lap nine but at the end of the lap he slid off into the barriers.

That handed Norris a 13-second margin over the rest of the field but that was soon eliminated by a safety car to recover Scott’s car.

After the restart, Norris was able to resurrect that gap over the remainder of the 25-lap race on the Indy circuit.

His dominance came despite Ben Barnicoat claiming second place after the restart from Sisa Ngebulana.

Ngebulana was also pushed back to fourth behind Faisal Al Zubair but was able to regain the final podium place before the end.

Barnicoat’s participation in the Autumn Trophy was initially only for the opening event, but his second place has now moved him to within 16 points of Scott.

Scott’s nearest rival after Snetterton was Sennan Fielding but he is absent this weekend, as are the Hillspeed duo of Struan Moore and Ameya Vaidyanathan, making for a field of five cars.