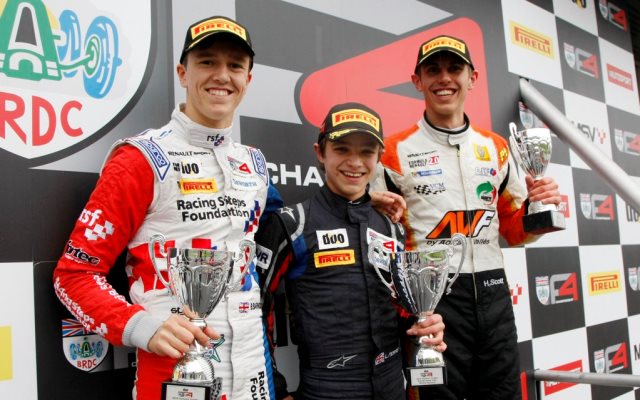 BRDC Formula 4 debutant Lando Norris?won by a commanding margin again in the second race of the Autumn Trophy finale at Brands Hatch.

In a role reversal compared to race one, Norris beat polesitter Harrison Scott off the line to lead at the end of the first lap, with Ben Barnicoat climbing into second behind him.

As in the opener, Barnicoat had no answer to Norris’ pace on the wet circuit and the HHC Motorsport driver – only participating after turning 16 on Friday – opened up a 10-second lead over the course of the race.

Scott pressured Barnicoat throughout but had to settle for third, with his points advantage over the Fortec driver now down to just 11 points ahead of Sunday’s two races.

Sisa Ngebulana and Faisal Al Zubair had lonely runs to fourth and fifth.