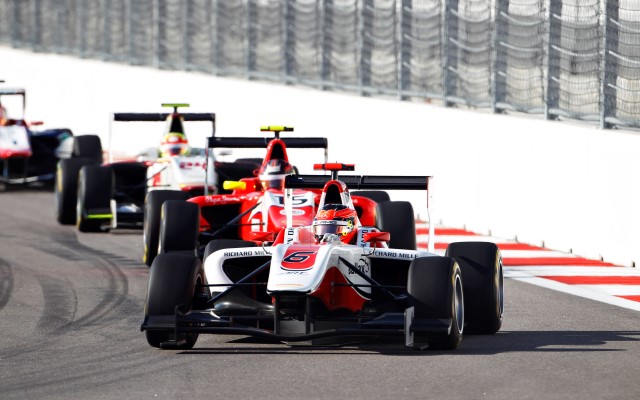 GP3 teams will be permitted to field a fourth car from next season when the new GP3/16 racer is introduced, as the number of outfits entered drops to seven.

Last month it was revealed that DAMS and Virtuosi would be given an entry for the next three years in place of the departing Carlin and Status squads.

However, Virtuosi – which has been active in GP2 under the Russian Time banner – is now absent from an updated list circulated with the announcement regarding fourth cars.

This brings the number of teams present in the series from 2016 down from eight to seven, and would have made for a maximum grid of 21 cars in had teams only been allowed to enter up to three cars each.

The additional permitted entry per outfit, which the series said follows a request from the teams themselves, will now mean up to 28 cars could be fielded.

“I am pleased to announce that our GP3 teams will be allowed to line up a fourth car next season,” said series CEO Bruno Michel.

“It is something that has been discussed between us and the teams this year and I feel that it will give them an even stronger financial base for the season to come.”

The number of teams competing in GP3 has gradually declined since the first two seasons in 2010-11, when 10 teams entered three cars each year to create a grid of 30.

Mucke Motorsport departed at the end of 2011 and was not replaced, while some other teams were allowed to enter just two cars instead of the previously mandated three.

The number of teams was then maintained at nine until the final two rounds of 2014, when Marussia Manor Racing was forced out by the impending administration of its parent company.

This year the grid size has varied between the maximum possible of 24 (at four of the seven rounds held so far) to 21 at Monza when clashes with other championships reduced the available driver pool.

When the roster of teams was announced for 2016-18 last month, Michel said: “In order to give more support to our teams in today?s challenging economic environment, we decided to limit the entries to eight, with three cars per outfit, and favour quality over quantity

“We will reassess our position should the situation changes.”