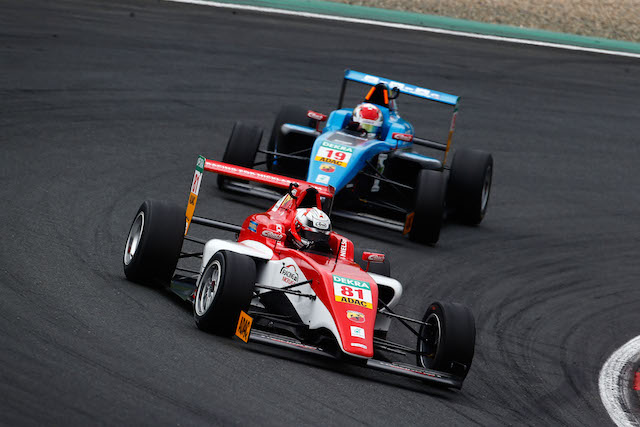 ADAC Formula 4 rookie champion Nicklas Nielsen will spend a second season in the category in 2017, moving to US Racing together with race-winner Fabio Scherer.

The Dane?also competed in Audi’s DTM-supporting TT Cup series, placing third overall as the leading rookie and taking one win, but will continue to compete in single-seaters this year in ADAC F4, joining the US Racing team led by former Mercedes DTM chief Gerhard Ungar and Formula 1 grand prix winner Ralf Schumacher.

Also joining the outfit?- which took Marvin Dienst to the inaugural ADAC F4 title in 2015 as HTP Junior Team – is former Jenzer driver Scherer, who claimed a surprise win in the Lausitz reverse-grid race after a gamble on slicks on a drying track.

The 17-year-old Swiss driver?failed to score outside of that race weekend and finished up 17th in the standings, as well as coming eighth in the rookie points.

“We are well set up with Fabio and Nicklas, who are both capable of scoring race victories,” said Schumacher.

“Nicklas did a great job in 2016 in winning the rookie championship. I knew him from his time in kart racing where he was already an exceptional talent.

“He is fast and extremely focused in his approach to developing as a racing driver and, above all, to winning.

“Fabio has also got himself noticed for his talent and speed.

“His victory at the Lausitzring showed that he is not only quick but also shows judgement, which is very important as a racing driver.”

South African Jonathan Aberdein will be another driver returning for a second season in ADAC F4, and will remain with the Motopark team.

The 19-year-old came 14th overall and sixth in the rookie standings last year in his first season in Europe, and has since dominated the inaugural UAE F4 series with Motopark.

“Jonathan was fast in all events last year, but as all rookies experience, it is challenging turning speed into quantifiable results,” said team boss Timo Rumpfkeil.

“2016 was a big learning curve for Jonathan; he had only come to Europe in March, he had never raced an F4 car before, and he didn’t know a single race track that we were racing at. But he is quick and impressively proved he has what it takes to win with his podium finish at Zandvoort.

“We wanted to give him the best chances for 2017 which is why we have been competing in F4 UAE. He has been able to improve his skills again and we are very optimistic that we will be a factor front and centre.”