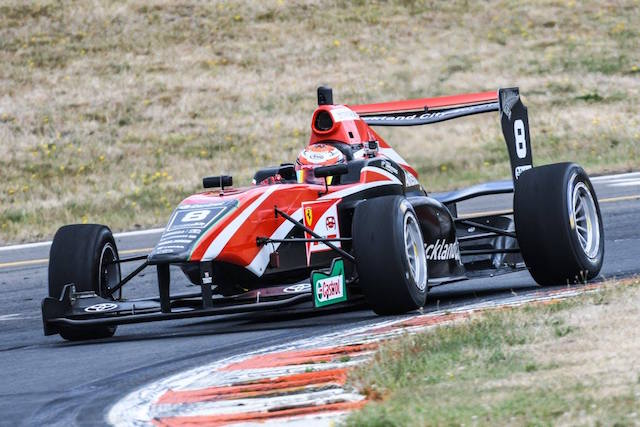 Marcus Armstrong?has taken his third Toyota Racing Series victory in the feature Denny Hulme Memorial Trophy?race at Taupo, whilst?Thomas Randle has increased his points lead ahead of the final round.

Armstrong got the better of pole-sitting M2 Competition team-mate?Jehan Daruvala to get the lead at the start, before a safety car and red-flag stoppage after an incident for?Kory Enders.

Following the restart, Ferrari protege Armstrong immediately pulled a 1.5-second gap over Force India-backed Daruvala, who then responded with a series of fastest laps to cut his deficit to a second.

The Indian then lost time with a lock up on the very next tour however, doubling the gap, and he dropped time again near the end as Armstrong won by 6.7 seconds.

Having taken the championship lead in race two, Randle started the finale from fourth on the grid, four places in front of rival?Richard Verschoor, but the Australian lost a spot on the first lap while the Dutchman gained two, putting them nose-to-tail at the restart.

They would go in opposite directions at the restart however, with Randle able to re-pass Pedro Piquet?for fourth place and Verschoor slipping behind?Taylor Cockerton.

Randle spent the rest of the race up behind a struggling?Ferdinand Habsburg, who finished 16 seconds behind the winner but 0.143s ahead of Randle.

Verschoor – who has struggled for pace all weekend – lost touch with Piquet and Cockerton ahead of him and only just held off?Brendon Leitch for seventh.

Randle will take a 27-point advantage over Verschoor into the final round at Manfeild next weekend, with Piquet only four points further behind.

Armstrong is 94 points off the lead, with Daruvala one point further back.