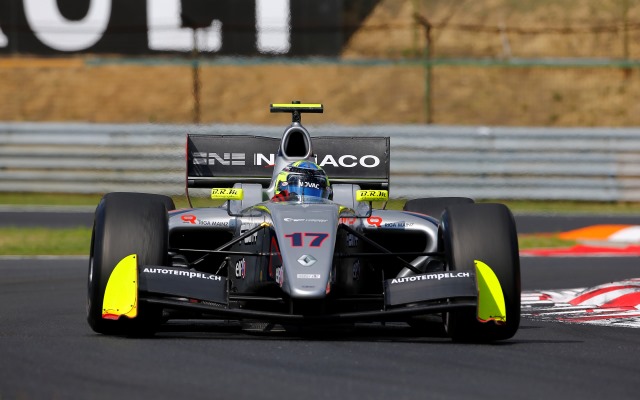 Andre Negrao has claimed his first pole position in Formula Renault 3.5 after managing the fastest time in a session that was interrupted numerous times at a soaking Hungaroring.

The conditions were treacherous from the start, with Norman Nato and Jazeman Jaafar both ending up in the gravel at the same point on their out laps.

Organisers ran the session under full yellow flags to begin with to allow the drivers to get some laps in the conditions after Friday’s dry practice running, but no sooner had the track gone green did Arthur Pic go off and bring out the red flags.

After the restart, four drivers managed to get times on the board before Zoel Amberg caused another stoppage. Friday pace-setter Carlos Sainz brought out more red flags with six minutes left on the clock, by which time Negrao had got to the top of the timing screens.

Sainz’s Zeta Corse team-mate Will Buller brought out a fourth and final red flag shortly afterwards, with the session not being restarted with four minutes left on the clock.

That left Negrao in first place, 1.333 seconds ahead of his Draco team-mate Nico Muller.

Series veteran Mihail Aleshin was third ahead of Antonio Felix da Costa, who survived a spin at the final corner. Will Stevens was fifth ahead of?Sergey Sirotkin,?Marlon Stockinger and Pietro Fantin, while Nigel Melker and?Matias Laine completed the top ten.

Dan Cammish reigns supreme in qualifying at a damp Rockingham