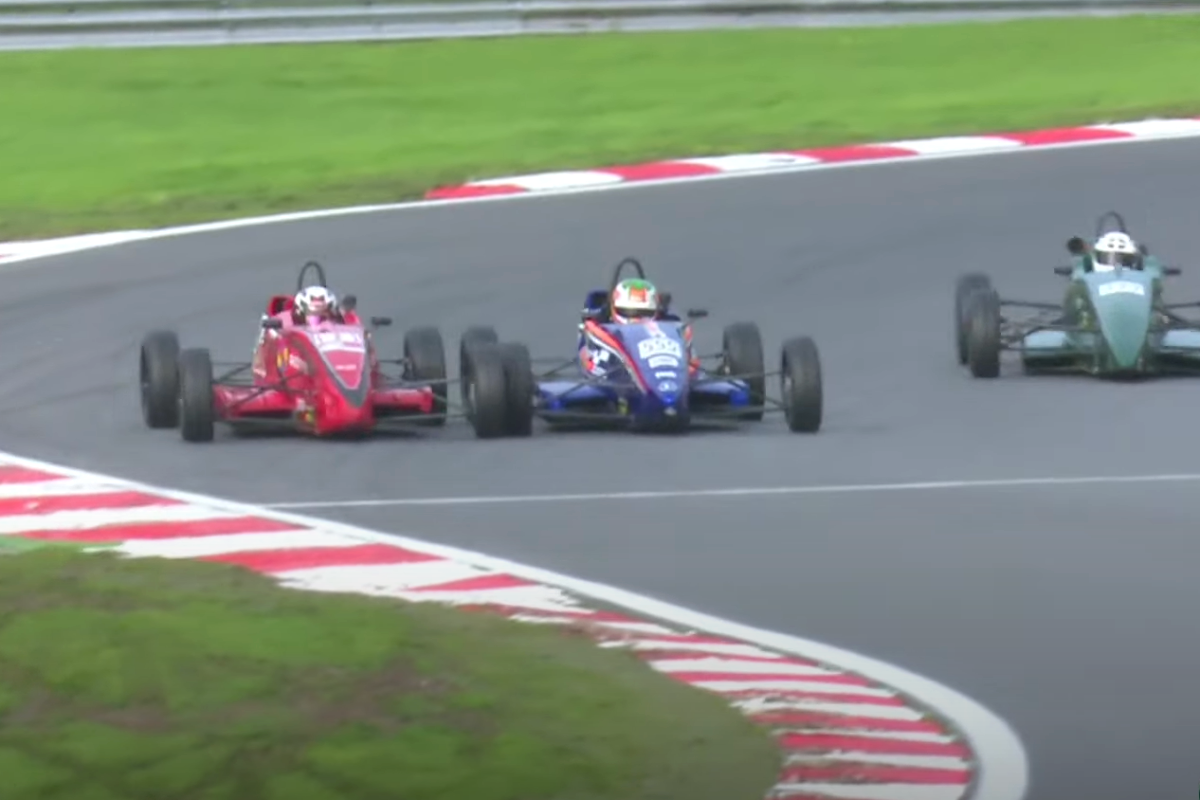 Saturday’s action at the Formula Ford Festival proved to be highly eventful, with a clash between two of the pre-event favourites one of the big talking points.

B-M Racing’s Jamie Sharp faces an uphill challenge if he is to successfully defend his crown, having retired in heat two after contact with 2016 winner Niall Murray as they fought for the lead.

Sharp started on pole ahead of Murray, with little separating the pair in qualifying. Murray took the lead early on, but a mistake at Graham Hill Bend on lap five handed the lead back to Sharp before the pair collided through Surtees on the following lap. Unsurprisingly their views differed on the incident, with Sharp revealing the pair had spoken before the race.

“I’m not happy about it, I know the team isn’t either,” said Sharp. “He came up to me before the race and said ‘let’s not do anything stupid’ and then he does that.

“He gave me no room on the outside. It was essentially my corner still because I was told earlier in the year that you have to be exactly alongside, and he was behind my front wheel.

“I gave him room, completely, and he didn’t even attempt to make the apex and he pushed us both wide. By the time I realised how far over he was he hit me and that was it, I couldn’t do much after that.

“I was just taking my line through there. If he didn’t think he could’ve made it then he shouldn’t have done it, especially after saying stuff like that. It was a heat, desperation in the heat is just unnecessary.”

Needing to make it through a progression race on Sunday in order to make the semi-finals, Sharp is still remaining positive of his chances.

“I’m going to keep going, I’m not giving up yet,” he added. “That’s the fastest I’ve been in the dry since last year here, so I’m happy overall. It’s just a shame it ended like that.

“Once my tyres came in I felt dialled, so no complaints with the car. The team has done a perfect job. Just got to move onto tomorrow now.”

The stewards did not take any further action after speaking with the drivers afterwards, with the Clerk of the Course deeming it as a racing incident. Murray agreed with the decision.

“Well that’s what the clerk deemed it was. It was very unfortunate, I think both of us would have been good contenders,” he said.

“It’s put me back a good bit and it’s put him nearly out. It’s an unfortunate thing. He squeezed me a little bit on the entry but he did give me room, and then on the exit I gave him room and I think he lost it a bit on the marbles on the outside.

“You could see it on the livestream, he wasn’t actually on the kerb, he was on the painted bit of Tarmac. It looks like a kerb. He lost it a little bit, and touched wheels and both of us went off.

“I was lucky that I didn’t have any damage. Jamie not so lucky. It is very, very unfortunate. I do feel sorry for him for what happened. Nine times out of 10 you touch wheels going through there and nothing happens, or you might touch wheels and go straight across the grass. It’s kind of unlucky for both of us, and that’s kind of an unfortunate end to it.”

Murray is likely to start mid-grid in his semi-final, with rain expected, revealing that a brake issue had caused the mistake a lap before his coming together with Sharp

“I shouldn’t have been in that position anyway,” he reflected. “I had serious pace, and just had a brake issue that we’ve been chasing since [the National FF1600 finale at] Donington Park. It seemed to be gone on Wednesday, but it’s just miraculously come back today.

“Twice in Paddock {Hill} and once in Graham Hill, the brake balance changed and it just locked up the rears going into the corner. So I just lost it. I had way more pace but I couldn’t pull away for no reason.

“Kind of annoyed with myself to allow that mistake to happen, I probably should have just backed off a little bit.

“Probably 14th on semi-final grid. We’re just going to have to race from there. We’ve good pace in the wet. I was basically the same time as Jamie in the wet this morning in qualifying, and he’s been the pace all week, as he was last year in the wet.