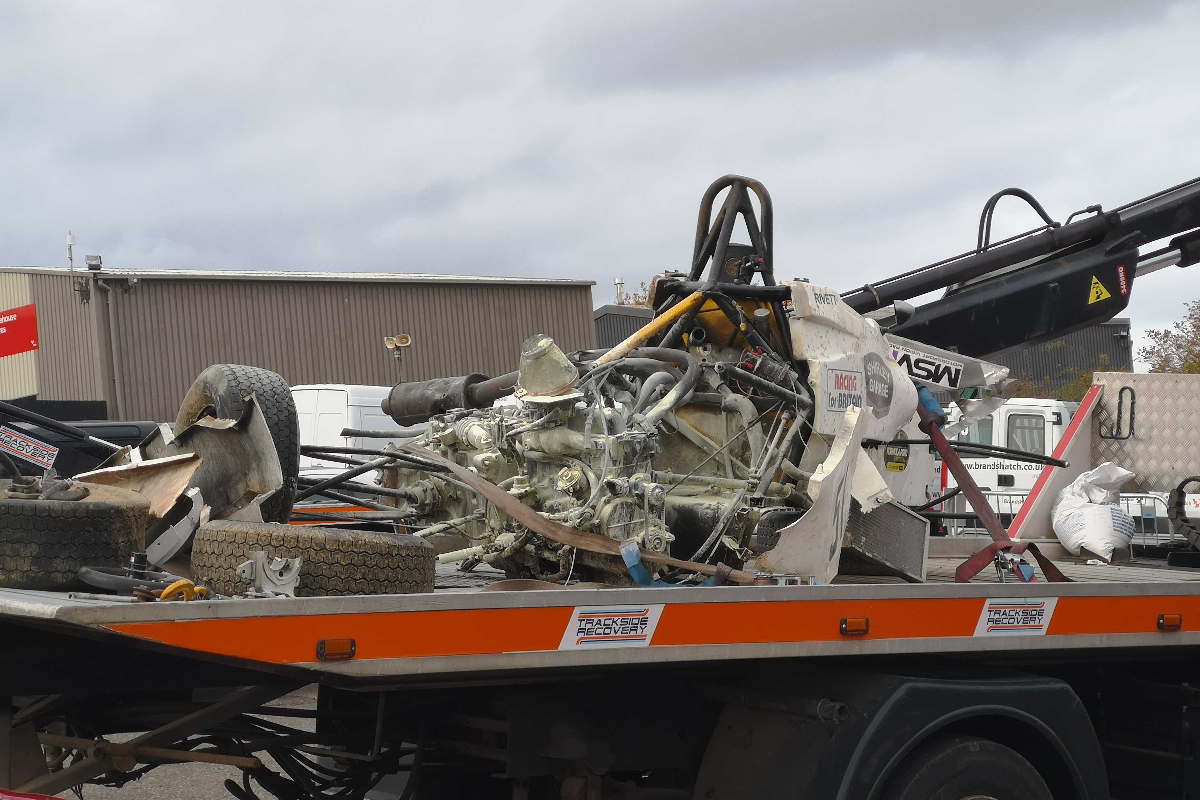 Tom McArthur and Matt Rivett escaped a horror crash in the Formula Ford Festival heat at Brands Hatch on Saturday.

On the run to Paddock Hill Bend, Rivett looked to the outside, but as they reached the corner he then decided to switch to the inside behind McArthur. As he did so, the front-left wheel of his Van Diemen RF91 rode over the rear-right wheel of McArthur’s Van Diemen RF86.

Rivett’s car then went over the rollhoop, “just about” missing McArthur’s helmet by milimeres, then landing on the right-hand side of McArthur’s cockpit. His rear-left wheel landed on McArthur’s rear-right, with that impact then launching him into a roll across the front of McArthur’s car.

He landed upside down on his front-right wheel, with the suspension arm collapsing, and as the car continued to rotate sideways, the rear-left wheel hit the gravel trap on the outside of the corner and flung Rivett into another roll in the air.

On his second impact with the gravel, the car shed most of the bodywork and continued to roll until striking the barriers top-first and then the catch-fencing, which sent Rivett bouncing back down into the gravel trap as the rear wheels continued up Hailwoods Hill.

The race was immediately red-flagged, and both drivers exited their cars unaided –  although Rivett took longer due to the damage his chassis had taken – and were shaken up but responsive. Rivett was then stretchered away and taken to hospital, where several hours after the crash he posted this update on Facebook:

Thank you for all of the messages of concern, I’m fine just waiting for a few check-ups at hospital but other than a bit shaken up I’m okay.

Formula Scout spoke to both teams afterwards, with Enigma confirming Rivett will remain at hospital and will not return to the track on Sunday, while the Simon Hadfield crew reached out to parts supplier Universal Racing Services to repair McArthur’s car so he can compete in one of the Progression races on Sunday.

“Just an unfortunate situation,” McArthur said to Formula Scout. “Matt seemed to misjudge trying to get the switchback on me. It’s bad luck. The important thing is that he was sat up and he was talking when they put him in the ambulance. That’s all that really matters. [My car damage] is irrelevant. Matt’s okay, that’s all that we care about.”