Munro remains unbeaten in FMCS with race one win 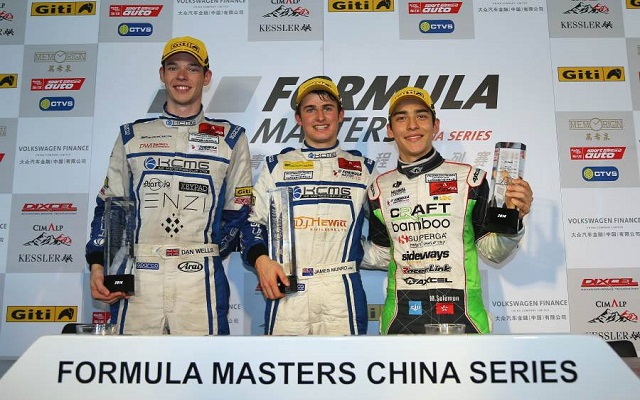 James Munro took his third win out of three races this season on Saturday morning with a commanding drive from pole.

Munro’s teammate Dan Wells, who started alongside the Kiwi on the front row, tried to go into the lead at turn two on the first lap, but was unsuccessful, and was not able to get any closer for the rest of the race. Behind them, Matthew Solomon picked off Aston Hare at the start, with the Eurasia driver battling with his Meritus rival for three laps before finally managing to pul away.

There was a four-lap Safety Car period from lap three due to Ronald ?Wu‘s stranded Zen Motorsport car. That helped Solomon to get right on Wells’s tail for second, but he fell just short at the end.

Hare finished fourth ahead of Yin Hai Tao, Pu Jun Jin, Senna Iriawan, with Sean Hudspeth in eighth. Behind them, Bao Jin Long prevailed in a frantic dash to the line ahead of Matthew Swanepoel and Yuan Bo, the South African taking the final point.

Andersen Martono finished twelfth on the road initially, but received a 30-second penalty for starting outside his grid box, which subsequently dropped him down to 16th and the last among the finishers.

Munro also took the fastest lap of the race which secured pole position for him in race two. Solomon starts alongside him on the front row with Wells in third, and Hare and Yin making up the top five. Iriawan will start sixth, ahead of Pu Jun Jin, Swanepoel, Hudspeth, with?Martono rounding off the top ten grid slots for race two.