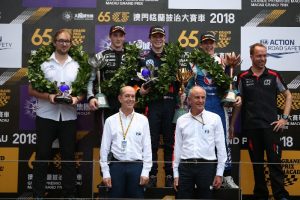 Motopark founder Timo Rumpfkeil has said he was “really chilled” as his drivers fought over Macau Grand Prix victory, which was the culmination of a 14 year journey for the team.

Rumpfkeil [far right] founded Motopark Academy in 1999 to compete in Germany’s Formula Konig series, and expanded into Formula Renault in 2004. It won both Eurocup titles, which started a journey that would take the team to back-to-back Macau victories with Dan Ticktum in 2017 and ’18, the latter a 1-2 thanks to BMW DTM driver Joel Eriksson.

“Taking so much effort for us to bring the driver line-up together – we always manage to get good drivers – I have to say thank you to BMW to give Joel the clearance to race here, which I don’t think is usual for manufacturers to say. BMW didn’t think for a second on it.

“We’re really happy to be 1-2 here. Always an opportunity to put a few things into perspective, and I think we’ve seen today that Dan really deserves this one. A very dominant weekend, I can’t remember seeing somebody top each session, winning the qualification race and grand prix.

“Last year he was fortunate. Quick, but fortunate. Here he won it on sheer pace, and I think that’s even more of a warning [to naysayers], and therefore is a very special weekend for us, and probably an emotional way to say goodbye to Formula 3 as well, for the moment.”

With two of his drivers fighting for victory this year, Rumpfkeil could’ve expected to have been on edge.

“Last year we were mega nervous. You have to see – we came into FR2.0 in 2004, and we started moving our way up here from the end of 2010 [the team’s Macau debut]. We were the bloody last garage here. We moved our way up, now we are on the top of the garage list as last year’s winning team.

“So 2017 was a lot of pressure, and I can confirm in 20 years of doing this I an normally pretty chilled. Last year my pulse was probably 200 before we even started.

“This year was pretty easy actually, because I know the two boys know what they are doing. We had a good chat with them, because I think they both deserve the win, and [so] they know the importance for the team’s effort, because we have 35 people working their asses off here for this event. So it was important to give them the reward [of victory].?That was all good, and I have to say I was really really chilled in the race, surprisingly.”

Juri Vips and Ferdinand Habsburg finished seventh and 11th for the team, while Marino Sato retired in a first lap crash after starring in qualifying.

The team will expand into Super Formula and Japanese F3 next year in partnership with B-MAX Racing, and plans to field cars in the proposed Gerhard Berger-ran F3V championship.