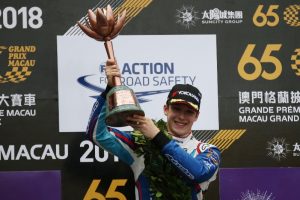 Renault Sport Academy member Sacha Fenestraz was delighted to end his 2018 with a podium at the Macau Grand Prix, after a difficult maiden European Formula 3 campaign.

His season started with victory in the second race at Pau, but he added just two further podiums at Silverstone, where he told Formula Scout about the tyre issues blighting his season. He finished 11th in the standings, one place behind team-mate Jehan Daruvala.

With his Renault bosses watching on, Fenestraz impressed by qualifying third for Saturday?s qualification race. He was demoted to fourth on the grid for the main race by BMW DTM driver Joel Eriksson, but the Frenchman had saved four fresh tyres for the main event.

He put them to good use at the start of the race, sweeping past both his Carlin team-mate Callum Ilott and Motopark?s Eriksson to grab second. Eriksson would re-pass on him the first safety car restart, caused by the two multi-car opening lap incidents.

?[The overtake on Eriksson] was pretty good,?Fenestraz recalled. ?I had a really good start, from fourth to second. It was a long race, with the red flag and the safety cars.

?I knew Joel was really fast, and was really pushing. I didn?t have a good restart [after first safety car period], and Dan was really on it for the restart this time. And Joel just passed me on the straight with the slipstream.?

Fenestraz believes third was the best he could have achieved, admitting the Motopark duo of Dan Ticktum and Eriksson were ?too fast?.

?I?m really happy to be third,? Eriksson added. ?Obviously I wanted the win, but for my second time here it?s pretty good. I?m already looking forward to next year.

?I think I did a really good job. It was going to be hard to beat Dan [and Eriksson]. They were quick all weekend. It?s true we had an advantage with the new tyres, but with the red flag and all that stuff you cannot take the most out of it, I would say. I still had a little advantage, but they were [too] fast.?

It?s unknown whether Renault will retain the 19-year-old Franco-Argentinian, but it?s likely he will compete in the new FIA International F3 championship next year. Two months ago he made his GP3 debut with Arden at Sochi, but failed to score.