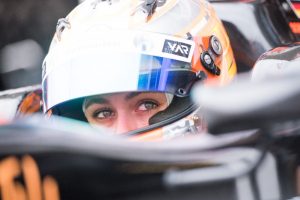 Sophia Floersch suffered a spinal fracture from her horrific Macau Grand Prix crash on Sunday, according to official statements.

Van Amersfoot Racing, who Floersch raced for both in European Formula 3 this year and at Macau, shared a statement from Macau organisers stating that Floersch, 17, is conscious and stable and experiencing back pain, and has been diagnosed with a spinal fracture. The severity of the fracture or its location is not mentioned.

Floersch?s car was pitched into the photography bunker at the Lisboa corner on the safety car restart, injuring herself, two photographers and a marshal.

Prema Theodore Racing’s Guan Yu Zhou saw the incident unfold and told Autosport that Floersch hit Carlin driver Jehan Daruvala, who had braked in response to lights signalling yellow flags, on the run to the corner

Having already lost her rear wheels, Floersch rode over Sho Tsuboi and but the top of the catch fencing.

The last estimate of Floersch?s speed was 171.6mph, taken just before the Lisboa corner.

TOM’S driver Tsuboi was also taken to hospital experiencing lumbar pain. Photographers Chan Weng Wang an Minami Hiroyuki and Chan Cha In, a marshal, are being treated for internal and external injuries of varying severity.

Floersch took to Twitter at 19:46 Macau time (GMT +8) on Sunday to thank her followers for their good wishes. It was also confirmed she was accompanied to hospital by her father, and team boss Frits van Amersfoort was thankful for the strength of the Dallara F317 chassis. Japanese F3 champion Tsuboi also tweeted about the incident.

Just wanted to let everybody know that I am fine but will be going into Surgery tomorow morning. Thanks to the @fia and @hwaag_official @MercedesAMGF1 who are taking great care of me.
Thanks to everybody for the Supporting messages.
Update soon.