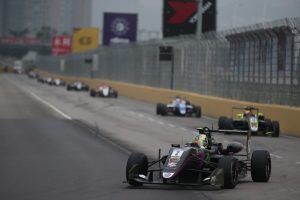 The Swede finished second to Ticktum in the qualification race, and lost the position at the start of the grand prix to Carlin’s Sacha Fenestraz. After the race was red flagged for an hour due to a scary crash involving Sophia Floersch and Sho Tsuboi, Eriksson moved past Fenestraz, before an Enaam Ahmed crash caused another safety car period.

This provided an opportunity for DTM race-winner Eriksson to take the lead from his team-mate, but he failed to make the most of it.

“At the safety car restart, he was doing a really good job. I was not really on it in the restart, so I missed a few metres, and I think that was the saving moment for Dan in the race,” he said.

“Then he had just enough space behind him to just keep the slipstream away from me. That was super work from Dan, and super work from the team this weekend. I’m very happy with second place.”

Earlier in the race, Eriksson had got back past Fenestraz in a daring move down the inside to Lisboa, and also had a single opportunity to get past Ticktum.

“It was quite a tough race. The overtake on Sacha was quite tight. But I knew I needed to pass him early in the race to have a chance on Dan, because I knew he was quick all weekend and I had the same speed as him.

“I tried to overtake him at the beginning of the race, just before the crash at Lisboa, and unfortunately it was yellow flags. So I had to back off, and abort the overtake, which I think cost me quite a lot because then I had less chances to overtake Dan.”

Although Eriksson came fourth in qualifying, his session ended early in a collision with Yuhi Sekiguchi across the finish line, an incident he was not at error for and made him “quite pissed off”. To make it to second in the qualification race he had to overtake Carlin driver Callum Ilott, who squeezed Eriksson down the main straight just as Fenestraz did.

“I had a good run in the slipstream, and I saw a gap on the inside. I think he probably couldn?t see me, or didn?t expect me to go on the inside because it was getting close,” said Eriksson afterwards.

“When I was on the inside he kept going to the right, I was scratching the wall, and I think he realised I was on the inside of him. It was a close call, it was a late call, but I think we both did a good job there to leave enough room, this time at least. It was very special.”