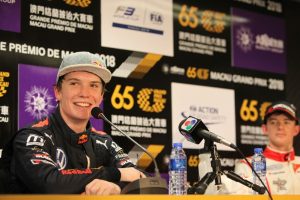 Dan Ticktum has described the “perfect weekend” that led to him taking his second Macau Grand Prix and FIA Formula 3 World Cup title in a row.

The Motopark driver topped both qualifying sessions, setting a record lap in the process, and dominated both the qualification and main race. He did this despite the appearance of several safety cars.

“The best way to describe [the second win] is, I’d say, less surprising, but more enjoyable. When you dominate a weekend like that – it’s been a pretty perfect weekend on my part and the team’s part – it’s very, very special for me,” he said.

On each of the restarts, both in the qualification race and the grand prix itself, Ticktum looked under little threat by the time the lead cars reached the tight Lisboa right-hander.

“Once you get overtaken you’re in the dirty air, and it’s very very difficult to get past again. I think the whole of this weekend I’ve just focused on every little job that I’ve had to do, and tick every single box.”

“I can’t really remember a weekend where I’ve performed so well, and that’s not only just me, it’s all the people around me, all the support I’ve had. It’s been just the perfect weekend. Thank you a lot to the team, the car was just so good. I’m immensely proud to represent Timo’s [Rumpfkeil, Motopark founder] team in F3.”

Rumpfkeil was the first person to test Ticktum after his racing ban, and instrumental in getting him into F3. Ticktum has credited him with being one of the key influences on making him the driver he is today.